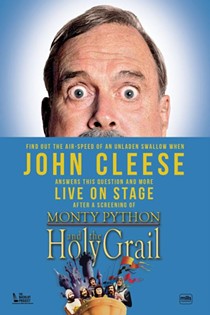 A veteran comedian, writer and film producer who co-founded the comedy troupe Monty Python, John Cleese will be on hand to answer questions after a screening of Monty Python and the Holy Grail that takes place at 7:30 p.m. on Saturday, Dec. 10, at the Akron Civic Theatre.

Originally released in 1975, the satirical cult classic takes the story of King Arthur and turns it on its head. Cleese plays Sir Lancelot the Brave (and a few other roles) in the film.

Today, the Civic launched a special ticket pre-sale that continues through 10 p.m. on Thursday. Use the Passcode: CIVIC.