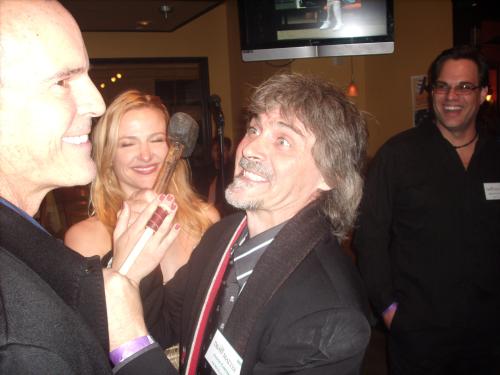 Twelve years ago, Ed Douglas, mastermind behind the local Goth group Midnight Syndicate, made a movie called The Dead Matter. Three years ago, he decided he wanted to remake the film. That remake finally premiered last night at Tower City Cinemas, packing two auditoriums at a private, invite-only event. In the horror film, a woman (Sean Serino) tries to contact her dead brother and then gets more than she bargained for when a vampire arrives and attacks both her and her friends. Douglas, who directed and co-wrote the film, introduced it, telling the audience, "I've waited a long time for this. From the bottom of my heart, thank you all for coming out." After the screening, patrons were invited to a party at Tower 230 where they could meet the cast and crew and get their autographs on the free movie posters handed out to everyone who attended. Douglas made a few remarks at the after party, relating a story about he lost a day of filming at the Mansfield Reformatory when a rainstorm soaked the set. "The beauty was that we had an excellent cast and they helped make it happen anyway," he said. Then he called various cast members onto the stage to say a few words. "I just hope you enjoyed it as much as we enjoyed making it," said Brian Van Camp, the actor who played a zombie. "We had a dream about making this movie and that's what this is all about," said producer Gary Jones. Serino simply said it was "an amazing experience." Props from the set and production materials from the original Dead Matter were also on display. Douglas said he's still working on finding distribution deal for the movie but anticipated nailing something down before the year's end.