Scooby-Doo is a mutt with more drool than bite. 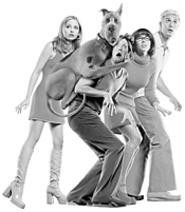 Scooby dumb: The Mystery Inc. gang.
We've only ourselves to blame. Our love for the detritus of popular culture has led us here -- once more, into a theater screening a multimillion-dollar adaptation of a cartoon that always looked like it cost $4.93 to make. We're knee-deep in the big business of nostalgia, which seeks to transform the most trivial bit of childhood effluvia into big-money payoffs, too often with no success.

Scooby-Doo, like Josie and the Pussycats before it, mocks one segment of its audience (adults weaned on the show's dull adventures) while ignoring their children. It has no idea whom it's for, so it plays to no one at all. "Our area of expertise is nutjobs in Halloween costumes," says Daphne (Sarah Michelle Gellar), who delivers most of her lines with a shrug. But she and her cohorts aren't there to serve the story, only to sell lunch boxes and action figures.

It opens with a dull adventure right out of the old series: Fred (Freddie Prinze Jr.), Velma (Linda Cardellini), Daphne (Gellar), Shaggy (Matthew Lillard), and a horribly computer-generated Scooby battle a ghost in a toy factory, only to reveal their nemesis as an old man with a grudge against Pamela Anderson. We're not sure if the whole introduction is an homage to the cartoon or a parody of it, so it becomes a punch line without a premise.

The rest of the movie takes place in a creaky theme park run by Rowan Atkinson (Mr. Bean) and populated by zombie-like spring-breakers and Sugar Ray. The team is left to solve the secret of who's brainwashing the kids. Who cares? The plot is merely a thin frame upon which writer James Gunn hangs his flat jokes -- a number of which involve smoking pot. It makes sense, since Warner Bros. is presumably aiming this movie at full-grown dopers glued to the Cartoon Network. Dude, pass the Scooby Snacks.