Duff rides her popular TV series to Rome and the big screen. 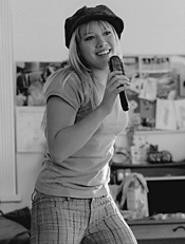 If you have never heard of Lizzie McGuire, you are not a female child between the ages of 6 and 14, nor are you a parent with a female child between those ages. For the uninitiated, then, Lizzie is the eponymous heroine of Lizzie McGuire, the three-year-old, wildly popular Disney Channel TV series that focuses on a junior high school student (Hilary Duff, also currently on screens in Agent Cody Banks) trying to survive the trials and tribulations of adolescence.

After spending three TV years in middle school, Lizzie is ready for high school, where The Lizzie McGuire Movie picks up. After the klutzy Lizzie humiliates herself at graduation exercises, she and a half-dozen other students take a chaperoned two-week trip to Rome. It is Lizzie's first time away from home. Chaperoning the trip is the new school principal, Miss Ungermeyer (Alex Borstein), a squat, loud, obnoxious "ugly American" if ever there was one.

As soon as they land in Rome, Lizzie is mistaken for local teenage pop star Isabella (Duff again, this time sporting dark tresses and an accent). Typical movie contrivance allows Lizzie to meet Isabella's yummy-cute singing partner and former boyfriend Paolo (Yani Gellman), who shows Lizzie around Rome and asks if she will do him a big favor. It seems that Isabella and Paolo are supposed to be presenting an award at some fancy music awards show, but Isabella is refusing to attend. Since they look so much alike, would Lizzie pretend to be Isabella just for that night?

The ruse requires Lizzie to confide in her nemesis, Kate (Ashlie Brillault, reprising her TV role), as well as her best guy pal, Gordo (Adam Lamberg, also from the TV series) who, unbeknownst to Lizzie, repeatedly covers for her. Lizzie seems to be the only one who doesn't realize that Gordo likes her as more than a friend.

McGuire is a hit with tweenies presumably because she is a typical, insecure teenager who sees herself -- and is perceived by the more popular kids at school -- as a total klutz and dork. Despite being low on the popularity totem pole, she has friends and is into clothes, makeup, music, boys, and whatever else adolescent girls are into these days. She also has an animated alter-ego who acts as a kind of dialogue bubble, revealing what Lizzie is thinking -- or ought to be thinking.

What's amazing -- from an adult perspective -- is that McGuire/Duff's legions of pubescent and pre-pubescent fans are able to suspend disbelief enough to believe that this total knockout, with her creamy skin, perfect features, gorgeous golden locks, and a body to die for, is not Miss Popularity. Don't kid yourself; anyone who looks like Lizzie in junior high school is most definitely in the "in" crowd. (We're not talking Eliza Thornberry here, with her braces, eyeglasses, and geeky appearance.)

Not being between the ages of 6 and 14, and not having a child who is, this critic queried a number of young girls who attended a screening with their parents. The youngest girl was 6, two were 8, and the oldest was 13. None of them could explain why they liked or identified with Lizzie, but they all did. They watch her TV series religiously, and they all loved the movie and were already planning a return visit to the cinema.

The Lizzie McGuire Movie is subversive enough for kids (Lizzie tells the chaperone she's sick, then sneaks out of the hotel to meet Paolo), but wholesome enough for most parents (she and Paolo never so much as kiss). Unfortunately for parents, however, this is not one of those kids' movies with plenty of humor for adults. For that you have to rent Lilo and Stitch or Shrek.