Capitalist punishment is the theme of Michael Moore's new film 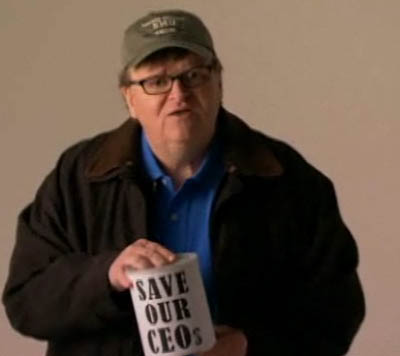 Considering how op-ed documentarian Michael Moore has been flogging the same themes now for 20 years, it's either a testament to Moore's prankster wit or the miserable times we live in that the fellow doesn't have to repeat himself as he cheekily exposes portfolio after portfolio of Stupid-Evil Corporate Tricks. In Capitalism: A Love Story, Moore offers his populist-history of the deregulation, foreclosures, union-busting, predatory lending and Wall Street greed that climaxed in last autumn's economic collapse and the billion-dollar breadline of financial tycoons — elites who don't even make anything — parading to Washington D.C. for cash bailouts (Ohio Congresswoman Marcy Kaptur and an unbilled Dennis Kucinich are among the heroes who resisted). Moore is in his glory when, like a fat, lumpy, funny alt-newspaper (no names, please), he turns up stuff the mainstream media missed, like the shamefully low pay of modern airline pilots, a deplorable corporate moneymaking scheme called "dead peasants," and the charge that stock market "derivatives" are calculated nonsense to befuddle what few watchdogs still monitor the bandit bankers and Goldman Sachs gangsters at the top of the financial food chain.

Interesting how Moore uses the same one-sided techniques as the right-wing defenders of free markets; naked appeals to emotion, patriotism, religion (Catholic clergy in Rust Belt congregations condemn capitalism as a sin, pure and simple) and a mythologizing of a distant good-old-days of fair pay and honest labor, before a company mouthpiece named Ronald Reagan got elected and turned the country over to his CEO handlers (conservatives similarly trace all trouble in the world back to Jimmy Carter). Just as the red-staters found their supreme ideal of leadership in George W. Bush, Moore drools over Obama as a genuine agent of change, not just a new boss, same as the old boss, though a late appearance by FDR leaves some food for thought. A novelty rendition of "The Internationale" over the end credits is a real keeper, and the Convention and Visitor's Bureau will not be happy that Moore replays nearly the whole of local comic Mike Polk's fiendish YouTube hit "Cleveland... We're Not Detroit," getting this dying, drab town the bad PR that money just can't buy (but lack of it can). ***