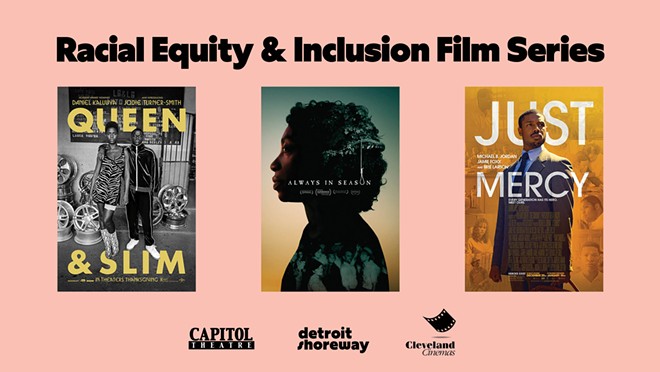 Cleveland Cinemas and the Detroit Shoreway Community Development Organization will present the third-annual Racial Equity & Inclusion film series this spring. In March, April and May, 2019 films focusing on race and racism will be screened at the Capitol Theatre in the Gordon Square Arts District, followed by refreshments and discussion at XYZ the Tavern.

“Our Racial Equity & Inclusion Film Series continues to welcome new participants into our neighborhood’s journey of understanding and demanding racial equity," said DSCDO Managing Director Jenny Spencer, in a statement provided to the media. "And the Capitol Theatre, nearly 100 years old, has been a fabulous asset for gathering our community around powerful stories. Diversity and social justice are core values of DSCDO, and systemic racism is antithetical to our vision of diverse, sustainable, and desirable neighborhoods where all people thrive.”

The films are as follows:

Wednesday, March 11th: Queen & Slim (2019, dir. by Melina Matsoukas). A couple’s first date takes a terrifying turn when a police officer pulls them over. Starring Get Out's Daniel Kaluuya and Jodie Turner-Smith, this sleek, heart-pounding drama, which was partially filmed in Cleveland, has been described as a reframing of Bonnie & Clyde as a story about blackness in America.

Tuesday, April 14th: Always in Season (2019, dir. by Jacqueline Olive). This tragic documentary tells the story of African-American teenager Lennon Lacy, who was found hanging from a swingset in North Carolina in 2014. Lacy's death was initially ruled a suicide, but it was later believed that he was lynched. The documentary traces America's gruesome lynching history as it follows Lacy's mother's pursuit of justice. Director/producer Jacqueline Olive will attend the screening and the discussion afterwards.

All films will be screened at 6:30 p.m. Admission is free, with a $5 suggested donation. Gratis snacks and a cash bar will be available at XYZ after the films.