Thanks to Depp and Burton, Willy Wonka just got weirder.

Send a News Tip
Charlie and the Chocolate Factory 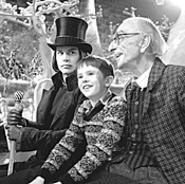 Wilder than Wilder: Johnny Depp (left) takes Wonka into darker territory.
Roald Dahl's inner child was evidently a contrary lad -- precocious, dark-minded, contemptuous of adult supervision, and fueled by a sense of justice that often proceeded via cruel whim. In Dahl's twisty children's stories, villains throw kids out of windows, beautiful women turn out to be hideous witches in disguise, and parents are eaten alive. By all accounts, young readers fear his books almost as much as they love them. At the same time, many grown-ups are baffled. Who does this guy think he is, turning our children against us?

Tim Burton's new movie version of Charlie and the Chocolate Factory is a perfect marriage of author and director. Dahl's 1964 classic, about a good-hearted poor boy who visits a fabulous factory owned by a profoundly weird man-child, inspired a 1971 film, Willy Wonka and the Chocolate Factory, starring Gene Wilder as the eccentric chocolate-maker, and it has become something of a cult favorite. But the combination of Burton's gift for dazzling visual invention and Dahl's taste for the macabre make this a far richer experience. As he did with Beetlejuice and Edward Scissorhands, Burton creates a fantasy world so complete and credible that we're immediately drawn down the rabbit hole and happily yield to his radically altered laws of logic and the odd shapes of his dreams.

As for the new Willy Wonka, in the person of frequent Burton collaborator Johnny Depp, he's exponentially more bizarre than the Wilder character -- an emotionally crippled androgyne with a deep-seated daddy problem, who hides his troubled head under a top hat and sheathes his hands in lavender surgical gloves. There's a hint of Michael Jackson theatricality in Depp's Willy, and you may suspect, from his odd, detached rants, that he's been eating something besides candy bars -- peyote, maybe, or blotter acid.

Happy to say, the famous Burton surrealism also suffuses Willy's entire domain. From the moment our Dickensian, goody-two-shoes hero, Charlie Bucket (Freddie Highmore), and the four nasty children with whom he's competing for Willy's favor enter the factory, the director and his terrific team of designers and special-effects folk start setting spectacular traps for them. And for us. The fat, greedy German kid, Augustus Gloop, is mired in a lagoon of liquid chocolate. The ambitious brat from Atlanta, Violet Beauregarde, is transformed into a giant blueberry. The know-it-all, Mike Teavee, is reduced to a six-inch miniature of himself, then sent off to be stretched in a taffy puller. Best of all, the spoiled English girl, Veruca Salt, is attacked by the army of squirrels Willy Wonka keeps around to sort his walnuts. Each child's demise is more delicious than the last, and each is capped off by an elaborate song-and-dance routine performed by hundreds of identical midgets -- Dahl's famous Oompa-Loompas -- all of whom are portrayed by the South Asian actor Deep Roy.

Want a nostalgic touch of Busby Berkeley for your next Hollywood production number? Here you are. Care for a massive dose of slick '80s funk? Fine. Still miss the Beatles? Burton and composer Danny Elfman manage to invoke them too.

As if Willy Wonka's factory were not a world of wonders in itself, Burton also piles on some clever, seemingly offhand homages to his favorite movies -- the knife-and-shower trope from Psycho, the black slab moment in 2001: A Space Odyssey, the slave-ship scene you find in dozens of biblical epics. Charlie and the Chocolate Factory is so jam-packed with movie references and visual dazzle, so stuffed with fresh ideas and darkly comic meditations on human behavior, that you may find yourself exhausted by the time Burton and screenwriter John August (Charlie's Angels, Big Fish) get us to the inevitable (and inevitably deflating) denouement, in which good, sweet little Charlie wins the big prize and mean, miserable, hopelessly neurotic Willy Wonka is saved by the pint-sized hero's good intentions, sense of fair play, and devotion to family.

In the course of his deeply subversive children's stories, Dahl clearly had lots of bleak fun, usually at the expense of adults, whom he apparently regarded as pathologically corrupt. But in the end, he usually fed his young readers a moral, if not a full-blast dose of morality. Burton obviously feels obliged to follow suit, and that's fine. But there's also something out of whack about a movie which, for most of its length, delights in savaging the ugly self-absorption of kids and grown-ups alike, and then turns around to show us redemption, pure and simple. I don't know about you, but I think some fairy tales are better off without any angels in them.