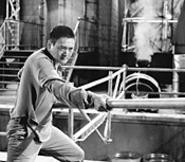 Bulletproof Monk may not be high art, but at least it has the distinction of being the first Hollywood production that gives an inkling of why Chow Yun-Fat became Hong Kong's greatest leading man some 17 years ago, after his irresistible supporting performance in John Woo's breakthrough A Better Tomorrow.

Chow's American career has been a disappointment. In Hong Kong, he was Cary Grant and John Wayne wrapped up in one -- incredibly romantic and charming on the one hand, a gun-toting action hero on the other. His first two American features, Replacement Killers and The Corruptor, inexplicably repressed his humor and charm: It was like trying to introduce Fred Astaire to a new audience without letting him dance. Ironically, it took the Chinese-language film Crouching Tiger, Hidden Dragon, for Chow to have a monster hit in America.

Bulletproof Monk, loosely based on a comic book, has a comic-book plot. In 1943, The Monk -- we never hear his name -- becomes the latest in a long series of Tibetan monks to take over guardianship of The Scroll of the Ultimate, which confers the power to, dare I say it, rule the world. Of course, Sauron has sent the Nazgul to find it, and . . .

Whoops. Wrong movie. No, this time it's Nazis, led by the evil Struker (Karel Roden), trying to seize the power-packed parchment. No sooner has The Monk taken on his responsibility than the Nazis arrive, managing to slaughter the entire monastery -- except for our hero, who makes a miraculous escape.

Suddenly it's 60 years later, in an unnamed North American city. It might be L.A. (to judge by the restaurant-rating plaques), or it might be New York (to judge by the subways), but it might as well be Toronto, which is where the film was shot. The Monk is still protecting the scroll, whose power has enabled him to maintain his youth. This is most frustrating for Struker, who's become a wizened old crock while chasing The Monk all these years.

The Monk encounters Kar (Seann William Scott), a pickpocket who moonlights as a projectionist at a Chinese movie theater run by an old Japanese man (Mako). (At least the film acknowledges the incongruity of this, rather than blurring the distinction.) Kar has learned some very powerful kung fu by studying the theater's martial arts films. For the record, we see him practicing in front of a Norman Tsui film, which is identified as the 1978 Descendants of Wing Chun.

The Monk is both bemused and amused to realize that Kar may well be his successor as guardian of the scroll. Nazi thugs are hot on The Monk's trail, so he must team up with Kar and with a tough babe named Jade (Jaime King, a.k.a. model James King, virtually unrecognizable as a brunette), who also has studied kung fu. Mayhem and silliness ensue.

Bulletproof Monk is pretty good fun, once it gets going. In the opening monastery scenes, Chow -- who's never seemed comfortable in period drag -- is stiff and ill at ease, but once we're in America, he starts flashing that wry smile and suddenly reminds us of . . . himself. He's still not allowed to "get the girl," however, since Scott and King are clearly the romantic couple here.

But despite the imprimatur of producers John Woo and Terence Chang, the film makes some of the same mistakes that have plagued other Hollywood films that interpolate the concepts of Hong Kong action. Particularly, while the filmmakers have gone to the trouble to hire Jack Wong Wai Leung (Hitman), Stephen Tung Wai (Hero, A Better Tomorrow), and the great Cory Yuen (Fong Sai-Yuk [The Legend]) to stage the stunts, they haven't bothered to hire an experienced Hong Kong editor. So, as in The Musketeer and Kiss of the Dragon, some potentially great action shtick is squandered by incomprehensible editing. This is particularly egregious during Scott's first fight and King's final fight; one might think this is because they're tyros who require greater use of stunt doubles, but in truth, it's not as if Chow -- for all his talents -- has ever been much of a martial artist either.

Still, the two younger leads come across pretty well -- but it's only Chow's presence that brings a touch of real distinction to the affair.