Cinematheque to Screen 'Revenge,' an Empowering and Brutal Rape-Revenge Thriller, this Saturday 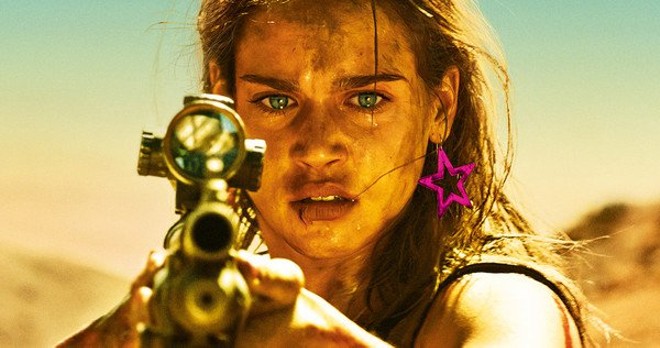 NEON Films
French writer/director Coralie Fargeat rocked the film world with her feature debut, Revenge when it hit the festival circuit this year, including a screening at the Cleveland International Film Festival. While the Netflix-of-Horror app, Shudder, has the exclusive streaming rights to the film, the Cleveland Cinematheque is offering the opportunity to catch this brutal film as it was intended, on the big screen.

Rape-revenge films were a staple of the exploitation wave of the 1970s, and many of these stories were told by men. In the wake of the #MeToo and #TimesUp movements, Fargeat's masterful examination of the emotional complexities of rape survivors feels like a perfect allegory for the fire burning beneath the surface of women everywhere.

The story follows a wealthy man named Richard (Kevin Janssens) who has escaped to the desert to enjoy a weekend of cheating on his wife and avoiding his responsibilities as a father with his mistress, a young aspiring actress named Jen. What feels like a fantasy getaway quickly turns into a nightmare when Richard's friends Stan (Vincent Colombe) and Dimitri (Guillaume Bouchède) show up earlier than expected.

Stan comes on to Jennifer who completely rebuffs him, and in a fit of rage from rejection, brutalizes Jennifer convinced that she wants it. Of course, because Richard and Dimitri are toxic masculinity personified, they completely stand behind their man and decide that the only way they can get away with their bro raping a woman is to kill the victim.

As is the case in most films from this subgenre, the attempt to kill her fails and the rest of the film is spent following Jennifer on her path toward survival and revenge. Revenge is a polarizing flick, with whiny dudes online complaining about it so much that the production company NEON even cut a specialty trailer using men's comments from YouTube similarly to how films will cite critic review comments to entice potential audiences.


Moments of Revenge are downright grueling to witness, but there's a cathartic release as we are allowed to slip ourselves into the shell of Jennifer (clearly named for the lead in I Spit On Your Grave and played by the phenomenal Matilda Lutz) and witness the savage justice enacted by a woman who was brutally violated.

Despite the uncomfortable reality of what Jennifer endures, there is not a single moment in this film where we're not cheering for her to give the men that wronged her their comeuppance. The circumstances surrounding Jennifer's survival are excruciating, and Fargeat puts to bed the idea that female filmmakers don't have the stomach for gore, brutality or buckets of blood.

The highly-stylized and gutturally captivating film completely blurs the lines between vengeance and excessive violence, but does so in one of the most satisfying third acts of recent memory. This is definitely a film that could trigger some audience members, so doing a little research ahead of time is recommended.

However, if you're into an action-packed thriller complete with justified sadism and enjoy watching rapists get exactly what they deserve, Revenge is an absolute must-see.

The film screens at the Cinematheque on Saturday, July 21 at 9:15 p.m. Tickets are available by clicking here.