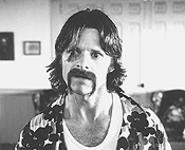 Steve Zahn is Wayne Wayne Wayne Jr., beauty pageant consultant.
Welcome to Happy, Texas, the town without a frown. Yes, apparently Happy, Texas was named after a real place. No, they didn't actually shoot the movie there. But director/co-writer Mark Illsley's feature directorial debut is still a fun, funny way to spend an hour and a half of your time.

Steve Zahn (Out of Sight) and Jeremy Northam (The Winslow Boy) star as Wayne Wayne Wayne Jr. and Harry Sawyer, guests of the Texas Department of Corrections, who are picking up dead armadillos on a lonely stretch of Texas highway when a ruckus with another inmate affords them the opportunity to escape. Stealing a beat-up Winnebago that promptly breaks down, the pair is "rescued" by Sheriff Chappy Dent (William H. Macy), who assumes the two men are the beauty pageant consultants the town has hired to prepare the contestants of Happy for the upcoming Little Miss Squeezed (as in orange juice) Pageant.

Figuring that the Podunk town, population maybe two hundred, is a good place to hide out while state authorities look for them, Harry and Wayne assume their new identities. The moment they hit town, Harry spots the town's small, unguarded bank and immediately starts planning to rob it. But what looks like a cakewalk for our heroes turns out to be strewn with all sorts of unexpected complications.

To give away more of the plot would spoil some of the film's best surprises and funniest moments. Suffice it to say that this is a thoroughly entertaining fish-out-of-water story that never makes fun of its characters and laces its humor with a sweet sense of humanity rather than the expected shot of cynicism.

Much of the dialogue is laugh-out-loud funny, especially when delivered by Zahn, a comic actor with a knack for playing clueless individuals. One particularly funny scene late in the picture finds an overburdened Wayne letting loose on Harry, complaining that his partner in crime is always off enjoying himself while Wayne is left to try to prep the contestants for the beauty pageant. (The actor received a Special Jury Prize for Comedic Performance at this year's Sundance Film Festival for his role here.)

With a droopy mustache and hound-dog eyes, Macy brings real pathos to the part of Chappy. British actor Northam, so excellent in The Winslow Boy earlier this year, is an unconventional choice to play Harry. He doesn't seem as natural in the part as Zahn and Macy do, but he doesn't detract from the picture either; he shines in a scene that takes place at a country-and-western dance bar.

Ally Walker (While You Were Sleeping) portrays the owner of the bank Harry plans to rob, and Illeana Douglas (Grace of My Heart) is the resident schoolteacher who longs desperately for pageant success. Only Douglas plays her part too broadly.

Director Illsley, who served as second unit director on three of director Kevin Reynolds's films (including Robin Hood: Prince of Thieves), has a gift for pacing. He keeps the plot moving at a fast clip that never feels rushed. He shares writing credit with producer Ed Stone. The duo have succeeded in coming up with a host of funny ideas, some hilarious lines, and a couple of colorful characters to deliver them.