Diary of a Fat Black Woman

Mo'Nique gets her groove on in the sassy but amateurish Phat Girlz. 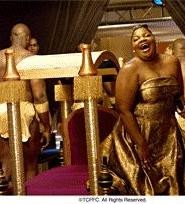 Phat Girlz feeds the fantasy with low-phat studz.
There's a certain exuberance, a "You go, girl!" spirit of defiance and self-reliance to the new Mo'Nique vehicle, Phat Girlz, that's undeniably appealing -- and likely to be especially so for its target audience of overweight women. (That is, assuming they see it, which the box-office numbers so far seem to indicate has not been the case; moviegoers tend to prefer fat black women when they're played by Martin Lawrence or Tyler Perry.) As Mo'Nique movies go, it's a whole lot better than Hair Show. But beyond the star's obvious enthusiasm for the project, there isn't a lot going for Phat Girlz, which looks cheap and falls apart after the first act.

The plus-size comedienne stars as Jazmin Biltmore (you know, because she's "built more" than most women), a sales assistant at a Los Angeles department store, who dreams of becoming a fashion designer, in large part because the clothes available for fat people are hideously bland. Constantly exclaiming, "I hate skinny bitches!" and lamenting the fact that she "ain't been laid in nine months" (poor dear -- try not being famous, and you'll realize that's nothing, especially for someone who's grossly overweight), Jazmin is taunted by the presence of her cousin Mia (Joyful Drake), who has a figure to die for and likes to rub it in.

Then one day, Jazmin's diet pays off. Not that she actually loses weight, but she wins a sweepstakes sponsored by one of her supplements that sends her and two friends to a Palm Springs resort for the weekend. With her demure and slightly less overweight best friend, Stacey (Kendra C. Johnson, who has worked as Queen Latifah's stand-in on the rapper-actress' last three movies and is a more agreeable onscreen presence), and Mia in tow, Jazmin goes through the usual facial-and-massage shenanigans familiar to viewers of Last Holiday and Big Momma's House 2. Things start looking up when it turns out there's a convention of Nigerian doctors in town, all of whom happen to be incredible physical specimens who revere large ladies. The tables are turned as Mia finds herself unable to get a date, while Jazmin and Stacey are the objects of adoration.

This brings us to one huge honking irony that goes utterly unmentioned. The message of the movie is that it's OK to be a fat woman; love yourself for who you are. Fair enough; Hollywood is guilty of overglamorizing the anorexic look, though taking it to the reverse extreme isn't necessarily glorious (Mo'Nique looks frankly unhealthy). But none of these overweight women has any interest in loving overweight men. Every guy on display here looks like a bodybuilder; that they all happen to be sensitive empaths is just gravy, but if you're going to idealize a chiseled physique in romantic partners, it might not be a terrible idea to hit the gym yourself. Hey, just sayin'.

Anyway, once Jazmin catches the eye of sexy Doctor Tunde (Haitian actor Jimmy Jean-Louis), much of the story collapses. It's too early for a happy ending, so a conflict has to be contrived in order to keep the two apart, but writer-director Nnegest Likké (gotta love that name) can't even come up with a legitimate point of contention that might divide the two. Instead, Jazmin briefly gets the wrong impression, realizes almost immediately that she was wrong, then determines she's not worthy, even though Tunde still likes her. Tunde disappears from most of the rest of the movie, and the remaining story becomes increasingly disjointed as it focuses on Jazmin's fashion ideas. (In actuality, Mo'Nique did launch her own fashion line for fat girls in 2000, which lasted two years -- a little short of the phenomenon this film makes the notion out to be. And yes, "fat" is a better adjective for Mo'Nique than "sexy succulent.")

Phat Girlz's biggest misstep may be its level of raunch. Though it squeaked by with a PG-13 rating, there are copious references to oral sex, sex talk, and depictions of sex between Stacey and the Nigerian man she meets. This stuff keeps things lively, but may turn off a lot of its target demographic. A little more suggestion and a few more of the scenes in which Jazmin prays to God and remembers her religious grandmother, might have nudged the movie into Madea territory. It still wouldn't have been good, but it might have made a better chunk of change.