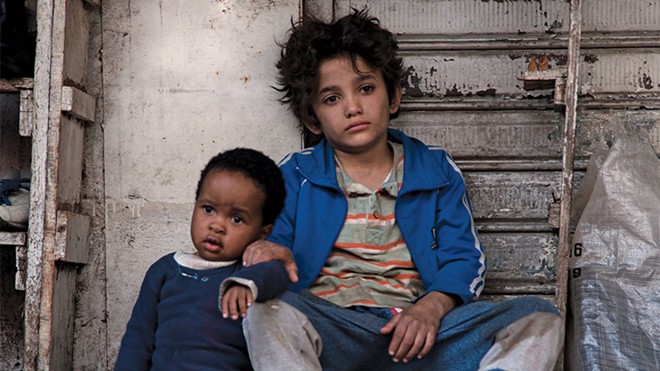 FARES SOKHON
The unfamiliar, hard-to-pronounce word “Capernaum” is translated as “chaos” in the title card subtitling of Lebanese writer-director-actor Nadine Labaki’s new film. It has been nominated for an Oscar in the Best Foreign Language Film category and opens Friday at the Cedar Lee.

Merriam-Webster defines 'capharnaum' as a “confused jumble,” a “place marked by a disorderly accumulation of objects.” The violent disorder of the Beirut slums, where the film takes place, and the urchins and refugees and undocumented migrants who occupy them, would seem to instantly explain the origins of Labaki’s title.

But Capernaum was also a biblical town, located in modern-day Israel, a few hours south of Beirut. In the Gospel of Matthew, Jesus condemned Capernaum to Hell for its denizens’ refusal to repent. There is a condemnation by the end of Labaki’s film as well, but its target feels off-base. In fact, the climactic “moral” of this otherwise brutally affecting story of poverty gave me second thoughts about its aims.

The first thing to say in any review of Capernaum is that the child actors who dominate the story are remarkable. It’s a testament to Labaki’s direction that a 12-year-old and an infant give two of the year’s most memorable performances. Both Zain (Zain Al Rafeea) and the baby Jonas (Treasure Bankole) are emotive and radiant on screen.

Zain is magnetic and defiant from the opening courtroom scene, when he announces that he intends to sue his parents for having him. He is now in prison, serving a five-year sentence – “for stabbing a son of a bitch,” he tells a magistrate – and his life has been so bad, so destitute, that he regards his own birth as a crime. The film, then, through two uncompromising hours, charts the circumstances that have led him to this conclusion.

We see excruciating poverty in the rubble and havoc of the Middle East, unleavened by moments of warmth that characterized, for example, Hirokazu Koreeda’s masterful Shoplifters, another Foreign Language Film nominee that intimately portrayed a poor family.

Here, Zain is one of many children living with parents who make ends meet by shuttling drugs into a local prison via laundered clothes. These are bad parents, it’s clear, who not only exploit and abuse their children but don’t even appear to have any affection for them. Though the family is Lebanese, Zain and his siblings might as well be undocumented. They have no ID papers and their lives (and deaths) go unnoticed by any authority. Zain is closest to his sister Sahar, and when she is married off, at age 11, to a neighborhood shop owner, Zain abandons his family in a fit of desperation and rage. The scene in the squalid apartment’s stairwell when Zain pleads with his parents not to send his sister away is absolutely as heartwrenching as it gets.

Zain then takes up with an Ethiopian immigrant named Rahil (Yordanos Shiferaw) in another slum and babysits her young son Jonas while she shuffles from job to job, trying to gather enough money for forged documents. But when Rahil is arrested, Zain must improvise, becoming a kind of parent himself, scrounging for food and money on the streets. All the while, his cynicism for the adult world hardens. “Why did she abandon you?” Zain asks Jonas as the baby cries in anguish for his mother’s milk. Though Rahil is selfless and kind, Zain sees reflections of his parents in her.

Spoiler alert: The film’s dramatic courtroom conclusion consists of the magistrate asking Zain what he wants of his parents. He replies, “To not have more children.”

One can certainly understand the hatred Zain feels for his parents. And when his mother visits him in prison in a flashback to announce that God has blessed her with another pregnancy, and Zain says, “you are breaking my heart,” his torment is crystal clear. It's an incredibly performed scene from the young Al-Rafeea.

But with the explicit messaging of the finale, coming from the central character with whom we have come to empathize, many of us might nod along. We might agree with the charge that parents bear responsibility for having more children than they can handle; and, much more critically, for not loving them enough. We might support the notion that these negligent parents must be stopped or pre-empted.

And this just frankly rubbed me the wrong way. If you want to draw a local parallel, the message felt more or less identical to Judge Daniel Gaul’s, whose racist antics in Serial Season 3 were a brief local cause celebre. Gaul would often tell the poor black men in his courtroom to stop having babies too, in fact would insist on it as a condition of their probation, and no one regarded Gaul’s position as a moral one. This was an outrage! This was unconstitutional! Yet in Capernaum, we’re meant to be persuaded by the horror of Zain’s life and the lives of his siblings.

Surely, though, Zain's parents — the film's villains — are victims, too. Whether or not they are shitty people is incidental to the geopolitical forces (aka the USA) that have immiserated them. And what about Rahil, a woman who fled violence in her home country only to be imprisoned in Lebanon, where she can be seen draining her engorged breasts in a fetid sink, pleading to God to forgive her for failing to be there for her son? Should this loving mother not have been allowed to have children either? Capernaum did not strike me at all as a “forcefully pro-choice film,” as a national critic has observed, unless we’re so heartless as to interpret ‘reproductive rights’ as the rights of a government to sterilize its underclass, and to do so for their own good.

Maybe I misinterpreted, and maybe there was nuance there that I didn't catch on a first pass, or maybe it was all just a narrative hook to expose the conditions of Beirut's slums, but I walked away both confused and bothered by this one.

Capernaum's cinematic accomplishments are nevertheless abundant. Labaki’s direction and the cinematography of Christopher Aoun capture Beirut and the lives of its people in richer and more devastating detail than anything I’ve seen. But its conclusion felt like the emotional power of Zain’s harrowing life experience was being weaponized in the service of a cruel social argument.