A drama about a couple that struggles to cope after its children move out of the house, Empty Nest has its local premiere tomorrow night at 7 at the Cleveland Museum of Art as part of the Museum's "Friday Night First-Runs" series. It also screens at 7 p.m. Friday, Aug. 14. Here's our review. 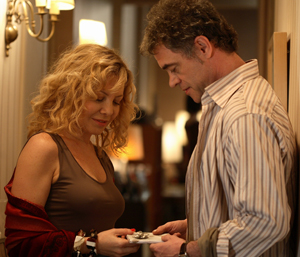 Empty Nest (Argentina/Spain/France/Italy, 2008) Argentine writer-director Daniel Burman (Lost Embrace) has said his film Empty Nest is about “accepting one’s own decline.” That statement alone should clue you in to the fact that this is heady stuff. Character-driven and philosophical to a fault, Burman’s film is, as its title implies, about a couple who must confront their problems after their children leave home. Leonardo (Oscar Martinez) and Martha (Cecelia Roth) are sophisticated types. He’s a writer, and she’s a housewife who fancies herself an intellectual. While they’re both smart, trouble starts when the last of their three kids leaves home to live on her own. Then the fighting begins. While Burman’s tone isn’t nearly as self-deprecating as Woody Allen’s, Empty Nest isn’t all seriousness either. Martinez plays Leonardo as both curmudgeon and buffoon, living in a world that’s part fantasy. And Roth is terrific as the whimsical Martha. ***