Al Gore takes on the other imminent threat to America. 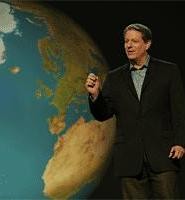 Al Gore sounds the alarm, but is anyone listening?
With ice caps melting, sea levels rising, and Poseidon sinking fast, this is no environment for any disaster movie -- particularly a real one -- to take our interest for granted. Thus An Inconvenient Truth, named for the superbad news of global climate change, isn't just another lefty doc for the art-house set, but "by far the most terrifying film you will ever see," according to the ads, which feature a trio of smokestacks spewing what looks like the perfect storm. Fear sells . . . usually. But how scary is it that this sugarcoated pill would be administered by Al Gore, an activist whose seemingly pharmaceutical calm is almost as alarming as his message? Credit the "former next president" and his director, Davis Guggenheim, with recognizing that their film of Gore's self-described "slide show" might come across as a bit more human with the help of a supporting player -- namely, a Pixarish polar bear whose would-be ice rafts crack under claw.

Seriously: That sad animated creature, left to drown in warm arctic water, emotes more poignantly than Gore or even the long-faced prehistoric casualties of Ice Age: The Meltdown -- a crucial achievement for a summer movie whose truth runs the risk of remaining merely inconvenient if it can't compete reasonably with fiction. Suffice it to say that the Al Gore concert film ain't exactly Dave Chappelle's Block Party. Onstage, pointer in hand, the pedant Gore mounts a hydraulic lift to follow the climb of carbon dioxide literally off the charts -- a dramatic high point of his presentation. More effective in attention-getting terms are computer images of the ocean engulfing lower Manhattan (the projected result of the Greenland ice sheet's shrinkage by 2050) and Gore's accompanying commentary: "Is it possible that we should guard against other threats besides terrorists?"

An Inconvenient Truth, produced last year but released, conveniently, during a new low for presidential-approval ratings and SUV resale values, isn't afraid to Bush-bash even at the risk of its leading man appearing partisan (or petulant). Gore asserts in the film that the issues facing the planet are, above all, moral -- an argument difficult for anyone outside the current administration to refute. Yet the personal is political, as the saying goes, and whenever Guggenheim departs from the show-and-tell to sketch the speaker's motives, the film makes for compelling psychobiography despite the fact that Gore, stiff as an air-conditioned breeze at the Four Seasons, isn't the least bit compelling himself.

"Well, that was a hard blow," he declares with body-snatched understatement over the usual TV-news montage of Florida's sudden climate change from blue to red. "What do you do? You make the best of it." Gore's election "loss," added to the lingering effects of family tragedy (his sister's death from lung cancer, his six-year-old's near-fatal accident) and his college science prof's persuasive weather predictions, is used to explain the pol's resolve to take his global warning on a world tour. Guggenheim's backstage repertoire consists mainly of Gore looking pensively out the windows of airplanes and town cars, the activist jet-setter's fuel-burning justified unconditionally by his urgent need to spread the message.

That message, as delivered by the film in abbreviated form, culminates in an end-credit list of questions ("Are you ready to change the way you live?") and constructive advice, including: "Encourage everyone you know to see this movie." I guess I can do that. An Inconvenient Truth does restore one's faith in the value of documentary-as-lecture, not least by extolling the virtues (rare as clean water these days) of politician-as-teacher. The lengthy handheld shot that follows the star from greenroom to stage amid steadily building applause won't turn Gore into Bono, but the man who would be president speaks in complete sentences about scientific fact, particularly as it relates to looming global catastrophe. And by current standards, that's a helluva lot.

How much can An Inconvenient Truth do to lower the temperature? More than Fahrenheit 9/11? The film charts the consequences of Gore's life circumstances on his work and, more literally, those of our civilization on the planet, drawing irrefutable connections between carbon dioxide levels and global warming, ocean temperatures and storm strengths, and the combined effect of all this on the depletion of soil and water and the spread of disease. Call Moviefone today? That cartoon polar bear would seem essential and, in the absence of Superman, maybe not enough. One shudders to think that our blockbusting fantasies of disaster might've dulled our sense of the real thing, but such fear certainly explains the uncanny resemblance of Truth's advertising to The Day After Tomorrow's. It's a tough climate in more ways than one.