Wanting is everything in the Everybody's Famous! culture of celebrity madness. 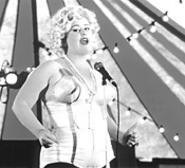 The Material Girth: Marva knocks 'em dead in Madonna garb.
If there's any justice in moviedom, this summer's feel-good hit will be an unassuming Dutch comedy called Everybody's Famous! Defying long odds, writer-director Dominique Deruddere has taken a couple of shopworn subjects -- the public obsession with celebrity and the ineptitude of amateur criminals -- and parlayed them into an original and inventive farce. It was nominated for an Oscar this year for best foreign film.

Clearly, Deruddere has watched hordes of TV-crazed masochists scratch and grapple for their 15 minutes of you-know-what on Survivor and Springer, and he's conversant with the backstage ambition that fueled All About Eve and the autograph-hound insanity in The King of Comedy. His unlikely hero, a stagestruck factory worker named Jean Vereecken (Josse De Pauw), might even feel at home in those venues. But Jean's charm and the movie's success lie in his guy-on-the-street innocence. Like the striptease kings of The Full Monty and the working-class father who finally gives in to ballet in Billy Elliot, he wins us over with the sheer blind force of his striving.

When not inspecting glass bottles on the graveyard shift, De Pauw's middle-aged dreamer hums distracted ditties into a cassette recorder and conjures up new schemes to launch the showbiz career of his 18-year-old daughter, Marva (Eva Van Der Gucht). Naturally, there are obstacles. For one thing, Marva's sullen intractability is equaled only by her lack of skill. Every week, Jean and his unhappy wife (Gert Portael) drag their not-so-little girl off to the local talent show, and every week her tuneless singing lands her at the bottom of the point standings -- below the Otis Redding and Andrea Bocelli impersonators. Stuffed into her vast new Madonna getup, the poor kid looks like a parade float.

But Dad's delusions career on. When the factory shuts down and he loses his job, he redoubles his efforts on behalf of Marva. How much would it cost to produce their own CD? What are the chances of hitting the national lottery? Jean's one stroke of luck -- and the movie's turning point -- comes via a chance roadside meeting with a sleek pop star who calls herself "Debbie" (Thekla Reuten). She's the kind of celeb who wears a blue plastic wig on the boob tube, rakes in $4 million a year, and regularly materializes on the front pages of the supermarket tabloids ("Was Debbie a victim of incest?"). Jean is nothing if not opportunistic. Before you can say Rupert Pupkin, he has drugged and kidnapped the famous singer, stashed her in a remote rental house, and enlisted the help of a young friend, Willy (Werner De Smedt), who's been struggling to put his ungrateful wretch of a girlfriend through college. Like Pupkin, Jean now plans to extort his moment in the limelight -- or rather, seize the moment for his daughter.

Thanks to a keen eye and a sure grasp of the absurd, Deruddere keeps the culture-of-celebrity jokes coming in a relentless torrent. Between the bungling of the kidnappers and the national media frenzy Debbie's disappearance provokes, we get the whole untidy picture of a world gone mad for fame. Wearing a plastic Michael Jackson mask, Jean meets in a parking garage with Debbie's manager, Michael (Victor Löw), who's the picture of comic avarice and who turns out to be less emotionally upset than financially intrigued by the whole incident. Back at the safe house, Debbie and Willy soon develop ideas of their own about celebrity and privacy. Inevitably, Jean forces upon Michael one of his awful tape cassettes. How long can it be until temperamental Marva Vereecken, a girl who ostensibly can't carry a tune, is transformed into a sensation?

The movies have gone down this road before, of course -- most recently in Denys Arcand's underappreciated Stardom, a dark satire released last year that expertly deflated the excesses of celebrity-driven "infotainment" with its story of a supermodel's rise and fall. To his credit, Deruddere puts a sunnier, funnier, more free-spirited spin on manufactured personality and disposable fame. Unlike the perpetrators of "reality" TV, he actually seems to be having a good time, and so do his actors. De Pauw, a veteran stage actor who has appeared in three previous Deruddere films (including Crazy Love), is exactly right as the downtrodden but ever-optimistic hero. With his puppy-dog eyes and long face, he looks like Inspector Clouseau on two hours' sleep, and his devotion to family knows no bounds. Aside from that, who wouldn't love a kidnapper who gives the victim's friend his home phone number? As for Van Der Gucht, who makes her acting debut as the dispirited, overweight Marva, she's the ideal foil for De Pauw's frenzied efforts to exalt her. Despite themselves, they make a pretty picture.