Jet Li goes out with a whimper. 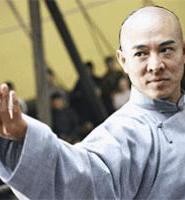 Fans of Hong Kong cinema have been anticipating Jet Li's Fearless all year, if not longer. The star is arguably the best in the business at combining major ass-kicking with actual acting; the director is Ronny Yu, known here for over-the-top horror sequels, but more familiar to genre fans as the director of The Bride With White Hair; the fight choreographer is the great Yuen Wo Ping, responsible for the most memorable battles in a few small films you might have heard of: The Matrix, Kung-Fu Hustle, and Crouching Tiger, Hidden Dragon. Not only does Jet Li call this his "most personal and most important martial arts movie"; it's also billed as his final martial arts epic, though he's being extremely precise with that term -- he says he'll continue to make action films, just not spiritually minded period pieces involving kung-fu.

Sounds good. But this is the same Jet Li who said that last year's idiotic Unleashed -- in which he played a man raised to think that he's a kung-fu-fighting dog -- was "my best work yet" (according to that movie's official website, anyway). Disillusioned by fans who have praised his combat skills over the years, Li worries that viewers weren't getting the right message about martial arts, and now he seems determined to make the audience pay a hefty penalty in sappy drama just to enjoy a few cool fight scenes.

So maybe you should be glad this is his last. The first half-hour or so is indisputably awesome, beginning in 1910 Shanghai as Li's Huo Yuanjia takes on three international challengers in a tournament, dispatching them with ease. Just as he's about to meet the final contender, the film flashes back 30 years to his childhood as the son of a great martial artist (Collin Chou). Traumatized when he sees his father lose a fight -- and not realizing that his father held back for fear of killing his weak-hearted opponent -- young Huo (Lu Yuhao) vows that the family will never lose again. Before long he has grown into Jet Li, a loving but absent father.

At this stage, plot is no more than the merest framework necessary to get us to the fights: Huo on an elevated platform, fighting a childhood foe; Huo fighting one-handed in the rain, while holding an umbrella in the other; Huo using an opponent' s swords and a pole to tie the rival in knots; Huo facing all remaining challengers at once. But Huo is not the disciplined, Mr. Miyagi type; he enjoys his wine and ego a little too much. When an unsanctioned fight goes too far, bringing terrible retribution upon him, he flees the city and goes into voluntary exile. So does the movie.

Rescued at sea and brought to a farm, Huo learns how to be calm and engages in some tedious nonsense involving crops as a metaphor for life. Fight fans, take note: once this happens, there are only two more battles remaining, and neither is the equal of what has been shown thus far.

In a troubled world, it's nice to hear a message of peace and to see a master of hand-to-hand combat demonstrate that withholding the death blow can be more persuasive than killing. But this is an action movie, and people don't come to be preached to; the Terminator flicks also favored world peace, but without pausing the action for nearly an hour to rub it in.