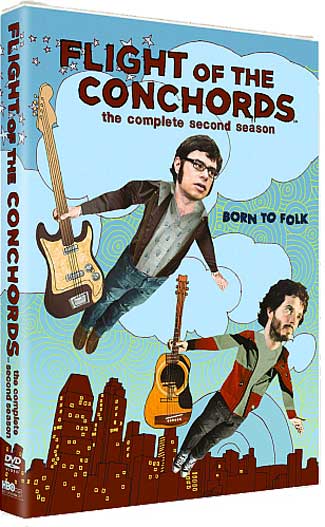 Bret and Jemaine, two members of a transplanted New Zealand folk rock duo trying to make their way in New York City, return in season two of the HBO series Flight of the Conchords, just out on DVD. In the ten-episode sophomore season of this comedy, the naïve Kiwi musicians form a gang to protect themselves from rappers they’ve dissed, write cause anthems for canine epilepsy to woo a woman, become addicted to hair gel, unsuccessfully dabble in male prostitution, spend a night as Simon and Garfunkel impersonators and try to take their relationship with band manager (and I use that term loosely) Murray to the next level . . . friendship. Guest stars that pop up in include Jim Gaffigan, Kristen Wiig, Lucy Lawless, Patton Oswald and Art Garfunkel.

The recurring offbeat residents in the Conchords’ hapless universe (manager Murray, stalker/fan Mel, pawnshop advisor Arj) play an even bigger role in the plots and songs of season two. For the uninitiated, this is musical with characters belting out full-blown, fully-produced songs an average of two times per episode. But, unlike the quirky showtunes of Dr. Horrible’s Sing-Along Blog, Flight of the Conchords features hit-inspired pop tracks like “Sugalumps,” “Too Many Dicks (on the Dance Floor),” “Friends” and “Carol Brown.” The soundtrack compliments the stories of Jemaine and Bret’s downward spiral from overdrafting their checking account with the purchase of a single coffee mug to facing eviction and deportation.

The series ends a bit ambiguously, with the door open enough for a third season if stars/writers/bandmates McKenzie and Clement are up for it, but final enough that fans will be satisfied (albeit disappointed) if the gigs stop here. The DVD includes a lot of great extras including a mini-documentary about the evolution and success of the series, outtakes, deleted seasons and more. Worth a second watch. Worth the investment for your collection.