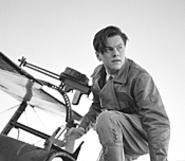 Leonardo DiCaprio is charming as a fantasy version of Howard Hughes.
The parade of real-life figures strolling into the googolplex has been endless this year: Look, there's Jamie Foxx as musical Mount Rushmore Ray Charles, Johnny Depp as Peter Pan author J.M. Barrie, Kevin Spacey as forgotten teeny-popper Bobby Darin, Liam Neeson as sexologist Alfred Kinsey, Kevin Kline as composer Cole Porter, Gael García Bernal as horny revolutionary Ernesto "Che" Guevara, Colin Farrell as king of the world Alexander the Great. It's as if the studios have been taken over by the History Channel -- or as if going to the cinema has taken on the feel of attending an opulent Halloween party, where famous living people dress as famous dead people and compete for a prize named Oscar.

The Aviator, Martin Scorsese's biography of Howard Hughes, is the most sumptuous of all these affairs -- appropriate, given its subject matter's penchant for wasting millions chasing fantasies other men couldn't even afford to dream about. Catered by Miramax, which long ago traded the cutting edge for the butter knife in its quest for Academy approbation, the movie runs three hours and features Leonardo DiCaprio as the nutty genius, Cate Blanchett as Katharine Hepburn, Kate Beckinsale as Ava Gardner, Jude Law as Errol Flynn, Gwen Stefani as Jean Harlow, and dozens more as infamous footnotes in countless history books.

Scorsese, it must be noted with great appreciation, keeps things aloft and buzzing; the greatest compliment you can pay The Aviator is that it never feels three hours long. It's great fun, but nothing more -- a Technicolor sketch of a man, a few years of a wondrous and tortured life reduced to some grins and giggles before it comes to the conclusion all biopics seem to reach: that it was Mommy who ruined the Great Man when he was just a little boy. Scorsese and screenwriter John Logan (Gladiator and, of all things, the last Star Trek movie) attempt to rescue Hughes from his madman myth by blaming it all on his poor ol' ma, seen in flashback scrubbing her naked son in a washtub while warning him of plagues that run rampant in the streets outside their Houston manse. Years later, his inherited fear of pestilence and disease would, apparently, force him to wash his hands till they bled and bottle his urine in milk containers -- scenes Scorsese loves shooting and showing as much as those involving his designing airplanes, buying and operating TWA, directing movies (among them Hell's Angels and The Outlaw, the latter starring Jane Russell's cleavage), and wooing Hepburn in a cockpit.

Ultimately, for all its attempts at getting inside Hughes' head, the movie's all about its stars' faces; it's a celluloid poster for stardom, an advertisement for the advantages and pleasures and occasional inconveniences of fame. DiCaprio, his baby face still too soft and round for the crooks and crannies of Hughes' angular visage, seems right for the part during the movie's early going. Barking orders at his underlings, among them John C. Reilly as longtime accountant and confidant Noah Dietrich and Matt Ross as designer Glenn Odekirk, DiCaprio's Hughes is an impudent child who wants all the toys in the store; nothing and no one is off-limits to a man willing to blow his last dime on a dream. His giddiness is infectious: The movie can plaster a smile across your face as it soars from movie set to golf course to nightclub in search of a bad girl and a good time. The audience feels like a passenger on the most luxurious private jet ever built, and Scorsese is a gracious host.

The director loves Hughes not for his flights of fancy, not for his battles with Pan Am's Juan Trippe (Alec Baldwin) or for the senator in his pocket (Alan Alda as Ralph Owen Brewster), but because he was Old Hollywood -- because he too made expensive and long movies that studios reviled and audiences adored. Scorsese has a blast showing Hughes' fights with Louis B. Mayer (Stanley DeSantis) and censor Joseph Breen (Edward Hermann), probably because behind the camera, Scorsese was imagining what he'd have done in Hughes' dirty white tennis shoes. And for a good while he hands the movie to Blanchett, whose Hepburn impersonation resides somewhere between homage and parody; she's not just Hepburn, but Hepburn as Tracy Lord and every other cold-blooded, hot-tempered character she ever portrayed. Blanchett gives a brilliant performance, that of an actress playing an actress who never stops performing, even in front of someone she's supposed to love.

But as with all biopics in which there are no surprises, The Aviator keeps its course and touches all the inevitable and obvious points: Hughes' purportedly platonic relationship with Ava Gardner, his acquisition of TWA in 1937 and subsequent battles with Trippe and Pan Am for the right to travel to Europe, his setting several air records by flying across the country and around the world, his descent into paranoia and madness. The movie ends with the sole flight of the Spruce Goose in 1947 in Long Beach Harbor -- not Hughes' final triumph, but certainly a better and happier place to end the film than having Hughes wind up in a dark Las Vegas hotel suite, surrounded by jars of his own piss, which would have been no fun at all.