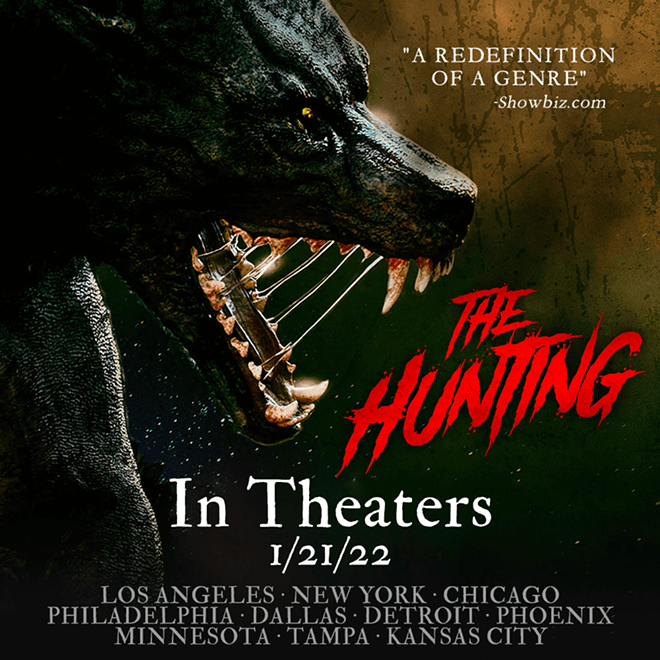 Courtesy Mark Andrew Hamer
Former Browns running back Peyton Hillis, who electrified Cleveland when he ran for 11 touchdowns and more than 1100 yards during the 2010 NFL season, is starring in a locally filmed horror slash police procedural now available on streaming platforms.

The Hunting, directed by local film producer Mark Andrew Hamer, follows the exploits of a small-town detective (Hillis) and a wildlife specialist (Solon High School alum Joelle Westwood), who are tasked with solving a mysterious spate of missing-persons cases in and around Mantua, Ohio. It is, per the film's publicity materials, a modern update on the werewolf genre.

Largely filmed on location in Mantua, director Hamer says the film used an entirely local crew and a predominantly local cast. Hillis no longer lives in Northeast Ohio, having returned to his native Arkansas after his flash-in-the-pan NFL career, but returned to the area for the part.

Hamer told Scene that Hillis was a perfect fit the complex role.

"Peyton took great care to honor the role of a veteran with post-traumatic stress," Hamer wrote. "The other Marines portrayed in the film are real Marine combat veterans who helped Peyton prepare for the role. Peyton strived to realistically capture the challenges faced by veterans as they acclimate back into everyday life after active duty. Our goal was to honor our veterans’ service and sacrifice."

The Hunting is a production of Brecksville-based Garage Creative Studios, where Hamer serves as president and creative director. Hamer directed, co-produced and co-wrote the script, alongside Heather Ryan and Terrance Ryan.

Though the film is playing in select theaters across the country, it's available to local audience only via video on demand. The low-budget, 85-minute feature won't be mistaken for Hollywood horror fare—largely due to its uneven pacing, dialogue and cast—but it's professionally shot and produced, and Hillis, surprisingly, appears to be one of the most talented performers of the bunch.