Ghost and the Machine

The Ring Two kills off logic to justify its existence. 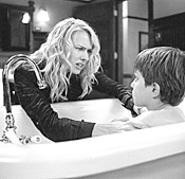 Rachel and Aidan work out their drowning issues.
The Ring, Gore Verbinski's 2002 remake of Hideo Nakata's Ringu, offered sufficient closure that it didn't exactly demand a sequel. The horror lay in wondering why a mysterious videotape kills viewers seven days after they watch it; to a lesser extent, there was the mystery of the creepy girl, face hidden under long black hair, who appeared to be at the root of it all. Once the explanation was revealed and the heroes apparently saved, there would seem to be little more to tell. Sure, the tape could go on killing people in exactly the same manner, but where's the fun in that?

If Japan couldn't do without a sequel, however, you know Hollywood can't. So The Ring Two, also directed by Nakata, bends over backwards to add new complications to the lives of the same two protagonists: Rachel (Naomi Watts), the hottest journalist in the world, and Aidan (David Dorfman), her way-too-creepy kid. They've moved to the small town of Astoria, Oregon, and since Nakata doesn't share Verbinski's fascination with green and gray camera filters, things look almost normal. But the film's opening sequence reveals a new wrinkle for American audiences (though Ringu was clearer on this point): It isn't enough for a person who views the cursed tape to make a copy -- one has to actually ensure that the copy gets watched by someone else. The notion that this metaphorical fine print is used by high schoolers as an extreme dare is briefly amusing.

So who did Rachel and Aidan show their tape to? This is never clarified. What is clear is that the copy has made its way up to Astoria, and the moment it claims its first victim, Rachel stumbles across the body. This, in turn, allows evil spirit Samara -- played by both Daveigh Chase (as a little girl) and Kelly Stables (in waterlogged-zombie mode) -- to locate Rachel and make a grab for the soul of Aidan, which loosely plays off Ringu 2's notion that surviving viewers of the tape retain a portion of Samara in their mind.

Nonetheless, we have to wonder: If Samara has control over electromagnetic fields and fiber-optic telephone networks, as seen in the original Ring, why does she require an actual fresh corpse in order to find Rachel? And if her major desire is to possess a child and reincarnate herself, and she can only do so with one who has viewed her tape, why does she keep killing those who watch it? There are more significant questions than these to ask, but to do so at this stage would spoil things. Suffice it to say that the climax makes almost no sense, but that Rachel's pivotal one-liner is a crowd pleaser.

Without the tinted camera filters, Nakata's movie is less obviously a fantasy ghost story. Far less commercially aimed at the masses than The Ring was, his work with screenwriter Ehren Kruger is potentially more disturbing this time around, as it plays off the real-life issue of postpartum depression and the ripped-from-the-headlines tales of mothers who have drowned their children as a result. In taking control of Aidan, Samara makes onlookers suspect that Rachel is indeed trying to drown her son. Now, if Nakata and Kruger had taken the final step of making the audience suspect that Rachel is crazy -- and that Samara is now all in her mind (think Donnie Darko's Frank the Bunny) -- The Ring Two could have been a dark masterpiece, and its apparent illogic would be easily explainable. Opportunity is missed, though; even an objective onlooker (Simon Baker) corroborates the ghostly visions -- and besides, Samara has a tendency to leave plenty of tangible evidence in her wake.

Nakata does offer some nice comic relief that Verbinski didn't -- Office Space's Gary Cole as a slick real-estate broker trying to unload Samara's cursed childhood home. Though initially out of character for the flick, his presence is a welcome respite from the unremitting tension.

The movie works while you watch it, with plenty of scares, both sudden and psychological -- the best set piece from Ringu 2 even gets recreated, and you don't really need to see anything else from that lackluster sequel anyway. If you're the type who has to figure out everything logically when you emerge from a film, all will look less effective in the light of day. Even if you buy the basic premise of a ghost on videotape, the tortuous logic demanded to create a sequel doesn't hold up to reasonable scrutiny, though it makes a kind of emotional sense. The best official Ring movie remains Ring 0: Birthday, a look at the teen years of Sadako (Samara's Japanese counterpart) that subverts the story you think you know and truly wrenches your heart at the end. Kruger's rewritten Ring saga rules out adolescence for Samara, so you'll have to look up the Asian DVD yourself, but it's way more worthwhile than The Ring Two.