The Black Dahlia searches for Hollywood's heart of darkness. 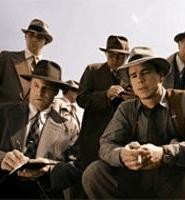 De Palma turns Hollywood's most notorious murder into a brooding buddy flick.
A film noir directed by Brian De Palma from the novel by James Ellroy, The Black Dahlia is a cop story that unfolds in late-'40s Los Angeles, somewhere between the neighborhoods of Chinatown and Mulholland Drive.

The premise involves one of L.A.'s most notorious unsolved homicides. In early 1947, the naked corpse of a 22-year-old aspiring actress was found dumped in a South Central lot. She had been cut in half at the waist and surgically disemboweled; her blood was drained, her legs were splayed, and her face was carved into a jack o' lantern grin. The gruesome details were suppressed, but the mysterious victim (nicknamed in the press for her dark hair and matching wardrobe) entered local mythology as Hollywood's ultimate lost soul. Many confessed to the crime. The cops, the tabloids, and assorted cultists cast a wide net: Celebrity suspects included Woody Guthrie and Orson Welles.

In City of Quartz, historian Mike Davis calls the Black Dahlia murder "the crucial symbolic commencement of the postwar era." Subject of a mid-'70s made-for-TV movie starring Lucie Arnaz, the Dahlia also figured in John Gregory Dunne's True Confessions and the movie adapted from it, before "demon dog" Ellroy packed the case with his own obsessions. Hewing closely to the first half of Ellroy's novel, the movie The Black Dahlia centers on the spell the dead woman cast on two cops, Bucky Bleichert (Josh Hartnett) and Lee Blanchard (Aaron Eckhart).

Competence trumps craziness -- if not the limits of the screenplay, written by War of the Worlds' co-scripter Josh Friedman. Although the action set pieces are impressive, the exposition is sluggish. For all the posh dollies, high angles, and Venetian-blind crisscross patterns, The Black Dahlia rarely achieves the rhapsodic, let alone the delirious. In the designated music video, Bucky finds himself investigating the Dahlia's connections in some La-La Lesbian Land. He's the only male, save for the band, in a deluxe supper club where k.d. lang sings "Love for Sale" as several dozen chorines gather in mock orgy formation on a grand staircase to nowhere.

A brunette of the Dahlia's type is haunting the joint. Bucky pursues her, discovering that Madeleine (a glamorously unrecognizable Hilary Swank, giving the movie's sparkiest performance) is a swinger from a very rich, powerful, and freaky Los Angeles family. Dinner with the folks is nearly as grotesque as the family gathering in Eraserhead. Madeleine's father, she tells Bucky once they've bedded down in an appropriately tawdry motor court, built a firetrap housing development out of movie sets discarded by Mack Sennett. Thus do celluloid fantasies insinuate themselves into life.

More obviously, the action is punctuated by suggestive screen tests featuring Mia Kirshner's bland Dahlia as well as flashbacks to The Man Who Laughs. Although from a narrative point of view these interludes are as inexplicable as Bucky's failure to be bounced from the force for his rampant indiscretions, they are necessary to establish the Dahlia as the unquiet corpse of every would-be starlet whose heart was ground for dog food. The movie's own heart of darkness is a deserted movie set, complete with torture/death chamber, beneath the Hollywood sign. Its pièce de résistance is a stag film featuring the Dahlia and a jailbait buddy. The cops watch this one at headquarters. Lee goes hysterical and splits; his Dahlia obsession leads, in another De Palma set piece, to his downfall. Bucky's fate is more ambiguous. Caught between a branded blonde and a moneyed brunette, and sharing criminal secrets with both, he needs to figure out which is the witch.

Describing the Dahlia's tawdry vehicle, Bucky allows that it's "pretty spooky stuff." Would that were true for the entire picture. De Palma is not, however, remaking Vertigo; although he casts himself as the Dahlia's unseen director, that obsession seems no longer his. There are moments when The Black Dahlia projects a spectral world, but in broad daylight its ghosts are elusive at best.