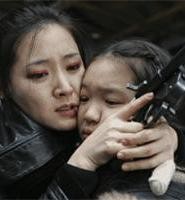 This anguished mother becomes merciless in pursuit of revenge.
By now, for masses of believers in mad Korean pulp, as it has been epitomized by Park Chan-wook's Sympathy for Mr. Vengeance and Oldboy, the blood-on-alabaster-skin montage behind the credits of Park's new Lady Vengeance portends a familiar dynamic. Exercises in Asian horror such as we haven't seen before, Park's films generally take his movie culture's yen for emotional meth and triples the dose; we know there will be no half-measures, no dramatic gasoline unignited, nothing short of horrified respect for the costs of suffering, cruelty, memory, and rage. Exploitative, sensational, morally outraged, or all three? Ostensibly the capper to Park's "vengeance" trilogy -- a designation that, perhaps dubiously, suggests that he'll now begin making films about other things -- Lady Vengeance is the most sullen and patient of the three. It's also breathless pop filmmaking: narratively mercurial, viscerally traumatic, and thematically infernal.

Park does run the risk of repeating himself: Here, the approach --elaborate retribution plotted over decades -- employed by the churlish villain in Park's Oldboy (and used as a gambit most famously by Stephen King) is handed to the heroine, Lee Geum-ja (Lee Yeong-ae), who is released from prison after serving 13 years for the killing of a little boy. She insists that she did it, and, in a flashback to her trial, even reenacts the crime for the police and TV cameras. But, as we eventually learn, a grumpy cop doesn't believe her, and it's clear from her stony demeanor and new, reddened way with makeup ("You've changed!" everyone says, perturbed) that the woman is ready for the long knives. (Locked into her character's introversion, Lee doesn't inhabit a human role so much as personify a bruised idea.) But we have to wait: Crowding out the crime's details in the film's first jigsaw-half are Geum-ja's experiences in prison, where she wins over a score of fellow inmates, donating a kidney to one and poisoning a dyke bully for the sake of another.

Pieced together in overlapping patches covering roughly two decades, the clockwork of Park's story (co-written with first-timer Seo-Gyeong Jeong) is often difficult to blueprint as you watch. But soon enough, Geum-ja's frosty post-prison intentions come to light, revealing her prey -- the kindergarten teacher actually responsible for the murder, played by Oldboy's unforgettable Choi Min-sik -- and the methodical scope of her payback plan, which makes use of each of her cultivated jailbird cohorts. But as much as Lady Vengeance spins around its implacable protagonist like a rabid dog on a rope, the film becomes in its last, galling act an unlikely but stunning ensemble piece. Traumatized members from the families of several murdered children are gathered together by Geum-ja for a concentrated act of mourning, a debate about responsibility, a protracted execution (in raincoats and by blade, pipe, axe, scissor, and who knows what else), a slice of birthday cake, and a taste of the afterlife.

There's also the matter of Geum-ja's daughter, wrested from her, settled with adoptive Australian parents, and quasi-kidnapped again -- but the less you know, the better chance Park's film has of locking its jaws on your brow. Park is less interested this time in submitting us to the chop shop (no tongues are cut, for instance) than having us pick over the emotional ripples of prairie justice, even collectively enacted, and consider the mechanics of hatred. Even the catalytic murder of the boy gets short shrift amid the flashbacks -- we're denied the same primal satisfaction in righteous bloodshed that David Cronenberg made such farce of in A History of Violence and Hollywood movies religiously exploit as their birthright. Killing bad guys for the sake of the American family is like shotgunning a duck in an overtly political barrel; in Park's realm, violence is a personalized, toxifying plume that spreads from perp to victim to survivor and avenging angel. The tragedy comes when you succeed in extracting an eye for the eye you've lost.

But perhaps it's political as well. Park has said in interviews that his quandaries of guilt, anger, and conscience were born during his South Korean youth under the terror-generating Chun dictatorship, when friends were dragged off and executed, while others, like him, stood by. For now, his films, as pop-cult as they so obviously are, come with a blood-rusted badge of validity and burn with regret.