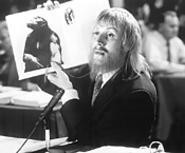 A glance through the summaries of this year's forthcoming blockbusters makes it immediately refreshing to note a movie about furry freaks and saucy geeks whose primary goal is just to, you know, do it. In Human Nature, written by Charlie Kaufman (Being John Malkovich) and directed by feature neophyte Michel Gondry, the wild thang is key to all things. For a while, the screwy comedy toes a rather obvious line between Miss Manners and Robert Bly, but then, to its credit, it leaps around willy-nilly, letting lust run its beastly course. Bravo, that.

Essentially, we're looking at a fervid love square. Lila Jute (Patricia Arquette) is a pretty lady with severe hirsutism, a source of shame and near-suicide until she decides to celebrate her fuzzy booty and go live, as it were, "in nature." (This may be symbolic of thousands of women chucking their razors and migrating to the Bay Area. Or maybe it isn't.) Fortune smiles on Lila in her career as a nature writer, but soon she discovers in herself a hunger for man-love, and begrudgingly she returns to man's world.

Shacking up with an excessively meticulous behavioral scientist named Nathan Bronfman (Tim Robbins), Lila represses her wild ways, practicing surreptitious full-body shaving and honoring Nathan's mania about using the correct fork. Further compromises are inevitable, however, as an innocent sylvan hike leads the couple to a naked wild man (Rhys Ifans), who appears to be the bastard spawn of Dr. Zaius and/or Tom Petty. When the apelike fellow is whisked back to Nathan's lab for carefully regimented research and training, he's dubbed "Puff" by Nathan's frisky French assistant, Gabrielle (Miranda Otto). What ensues is a lot of sneaky, scamming love action at cross-purposes, designed to reveal the flimsiness of terms like "natural" and "innocent."

Kaufman has fashioned this story as something of a nonlinear mystery. Thus, we get outcomes well before explanations, affording the plot a heady momentum. We know early on, for instance, that Puff is testifying before the Supreme Court and that Nathan has been shot in the head. Since we're frequently a step ahead of the characters, the writer uses the breathing room to throw down a wide variety of outlandish tics, ranging in tone from cuddly (fantasies of nursing babies) to cruel (shock collars). What could have been simply a nebbish's reply to Darwin is screwed up into a grand farce of desire and deceit.

The clever script would be for naught, however, if Gondry or his cast didn't instill each implausibility with humanity and charm. As Puff, Ifans is literally freaking hilarious, smeared with feces one minute and speaking the Queen's English the next. His musky aura (and seedy secret life) plays wonderfully against Arquette's fractured nymph, as she struggles to balance her delusions and lusts with Robbins's threadbare romantic idealism. Once Otto's wanton advances are mixed into the mess, it's anybody's game, and happily so. You'll laugh a lot, but not without a sense of animal desperation.