Harold and Kumar, stoned and searching (again) in Escape From Guantanamo Bay 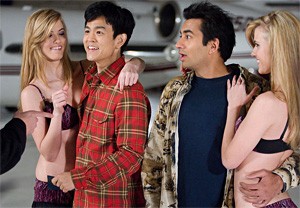 Jon Hurwitz and Hayden Schlossberg wrote Harold & Kumar Go to White Castle with the novel idea: What if you made a John Hughes movie, but instead of writing garishly caricatured bit players with names like Long Duk Dong, you cast an Asian actor as the smart, handsome, upwardly mobile leading man? Ultimately, the writers' spongy, satisfying li'l munchie treat — starring John Cho as Harold Lee, an investment-banking underling pining for his hot neighbor and a hot burger, and Kal Penn as his best friend, Kumar Patel, an underachieving Indian American stoner med student — became a work of stoned-outta-its-gourd subversiveness in which the stars' ethnicity definitely mattered, but not enough to, like, matter, dude. It owed its charm and eventual home-video cult rep to the fact that it was accidentally political — a raised fist clutching a bong high over its bowed head. Genius. Also stupid. But mostly genius.

Harold & Kumar Escape From Guantanamo Bay is mostly dumb, no matter how desperately and even valiantly it aims for "thinky." Yet again, the duo are on a road trip — this time not in search of the perfect late-night slider, a positively Homerian quest, but the old college friend who can clear their good names with the U.S. government after Kumar gets busted trying to light a smokeless bong on an airplane to Amsterdam. And, yes, smoking out on the way to the marijuana capital of the universe seems like the most redundant and unnecessary thing to do in the history of ever.

A franchise that began as a half-assed, half-baked, but quite natural political statement shrouded in pot smoke now strives too hard for relevancy, and its satire this time around is rendered clunky and clownish — chiefly in former Daily Show correspondent Rob Corddry as Ron Fox, a Homeland Security official who's so racist, he makes the Ku Klux Klansmen who show up later look cuddly. Corddry, who's always been too arch and hammy for the big screen, takes one look at Harold and Kumar, and decides it's "Al-Qaeda and North Korea working together," then ships the twosome off to Gitmo.

Eventually, Fox spouts off about Harold's parents' "ching-chong language" (that would be English), then pours out a bag of pennies in order to convince Harold and Kumar's buddies Rosenberg and Goldstein (Eddie Kaye Thomas and David Krumholtz) to drop a dime on H&K after their escape from Gitmo. The movie, which thinks it's being wildly seditious and boldly offensive, more or less possesses the sense of humor of a Catskills comic. Jews and pennies — how, yaaaaawn, hysterical.

Broken down into its individual sketches — toilet-paper commercials have more narrative — Guantanamo Bay isn't without its random laughs, if the sight of a poorly made-up cyclops is your idea of a tickle. Most of the funnier scenes come, once again, courtesy of Neil Patrick Harris as, of course, "Neil Patrick Harris," the way-too-hetero 'shroom junkie tailing a rainbow-riding unicorn on his way to a Texas whorehouse, where he goes to "get my fuck on" moments before brandishing a branding iron. Christopher Meloni, the first film's puss-drenched Freakshow, also turns up again — this time as a KKK Grand Wizard.

Truth is, as occasionally entertaining as it may be, Guantanamo Bay is essentially a bawdier — but, sadly, dumber — version of its precursor: It starts with Kumar on the toilet playing a one-man game of Battleshits 15 minutes after the final scene of the first film; once more finds the boys lost in the backwoods and surrounded by inbreeding bumpkins; and winds up in Crawford, Texas, with the boys smokin' out with a stale Dubya impersonator. And it ends with Harold and Kumar trying to bust up a wedding in which one of their True Loves is about to get hitched to a rising sumbitch in the Bush administration. Who knew this was really just a sequel to The Wedding Crashers?