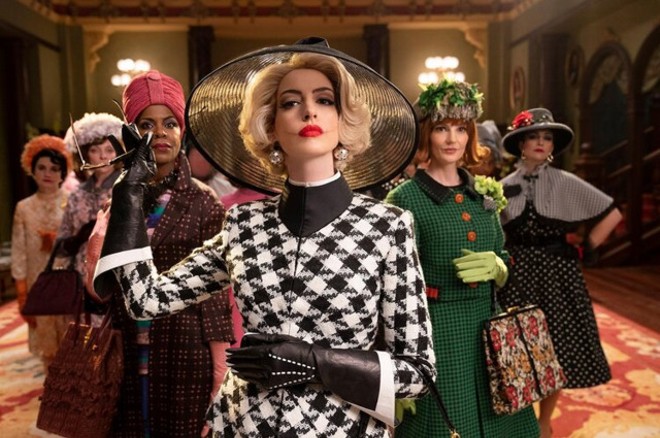 Courtesy HBO Max
Something wicked this way comes — and it’s the uncanny valley.

Robert Zemeckis’ adaptation of Roald Dahl’s fantastical and terrifying novel The Witches may not live up to its cult classic 1990 predecessor but it’s at least worth a watch for Anne Hathaway’s clearly-having-the-time-of-her-life performance.

Released last week on HBO Max, Zemeckis’ story unfolds in the 1960s American South. Our protagonist, a recently orphaned boy — who is never referred to by name in this film, but is endearingly played by child actor Jahzir Kadeem Bruno — goes to live with his sweet-but-tough grandmother (Octavia Spencer). Chris Rock, as Bruno (but older), narrates the tall tale in his usual wise-cracking way.

When the boy goes to a grocer with his grandmother, he encounters a woman who offers him a piece of candy. While in the aisle, a snake slithers out of her clothing and inches toward him. The boy tells his grandmother what he saw and she then spins a yarn about witches, with their bald, scabby heads (from wig rash); deformed claw hands; huge nostrils (for sniffing out children, who smell like dog poo to them); and demon mouths (which open from ear to ear and can be covered by makeup).

Witches love nothing more than seeing children suffer, or better yet, exterminated altogether, she says, and recalls the time a witch turned her childhood best friend, Alice, into a chicken.

As legend go, a witch never truly leaves a child alone once she has her eyes set on them, so to avoid a similar fate, the pair set off to an upscale hotel off the Alabama Gulf Coast in hopes of hiding out.

Irony has it that their escape plan lands them in the middle of a conference at that same hotel, swarming with dozens of kid-hungry witches.

As grandmother and grandson, Spencer and Bruno are a charming duo and their bond warms the heart. The first chunk of the movie develops their relationship enough to make viewers care about whatever fate may befall them.

This set-up also accounts for the flick’s largest divergence. Both Nicolas Roeg’s cult favorite 1990 adaptation and Dahl’s story take place in the UK and Norway, versus America, and definitely do not star Black protagonists. Much of the rest, however, is the same. Zemeckis, unlike Roeg, stays mostly faithful to Dahl’s original end. (Still, Zemeckis’ take is sugarcoated.)

This iteration is not as macabre as its forerunner, which relied on Jim Henson’s creepy puppetry and prosthetics. That’s not to say the witches of 2020 aren’t ghastly, but their stretchy CGI faces — with giant, Glasgow-smile-esque grins (seemingly the influence of co-writer Guillermo del Toro) — are more unnerving than fodder for nightmare fuel. Hathaway’s Grand High Witch often steps into the uncanny valley. Like Anjelica Huston, she turned in a full-camp performance.

Also on deck is hotel manager Mr. Stringer, played by Stanley Tucci, whose main characteristic is that he’s very, very confused and most definitely doesn’t get compensated enough to deal with such shenanigans.

Spoiler ahead: The boy, along with a newfound pal from the hotel, are turned into cute mice via a new witch potion (dispensed in candy). And we discover the boy's pet mouse he carries with him was also once a kid. My cat found a lot to love — the CGI mouse-children had him pawing at the screen throughout its 105-minute run.

Set in a post-Jim Crow South, the film occasionally points to racism but doesn’t tweak the narrative enough to create any solid commentary beyond the basics, like staff suggesting a woman like Spencer wouldn't be able to afford a stay at the hotel. More could have been subverted to root out the problems of its source material. Dahl was known to be anti-Semitic, racist and misogynist. His books are not divorced from these views — many of his characters, subtext or not, are based on hateful caricatures. Yes, his stories have influenced generations of children, but those adapting his work should do so with modern understanding or not at all.

Zemeckis’ The Witches had the potential to say something new but instead chose to drop the same story into a different setting without texturing it to the context of its period. What results is a film that, while spooky fun for families, begs the question: Why did this remake need to exist?