A documentary about two art collectors who happened to be in the right place at the right time, Herb & Dorothy shows tonight at 7 at the Cleveland Museum of Art. In case you miss it, it shows again at 1:30 p.m. on Sunday, Sept. 13. Here's our review of the film. 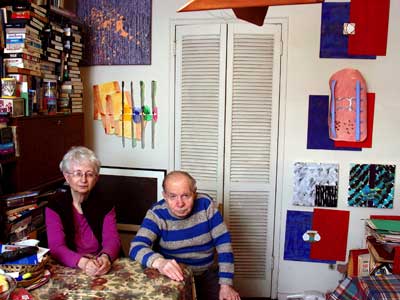 Herb & Dorothy (US, 2008) Herb and Dorothy Vogel have spent 40 years amassing one of the world’s best art collections. And they did it without spending a ton of cash either; he worked as a postal worker and she was a librarian. He paid for the art, and she paid the bills. They just happened to be in the right place (New York) at the right time (the ’60s). With an extensive collection of interviews and photos, Megumi Sasaki’s documentary chronicles their journey from casual art fans to collectors and includes vintage footage of guys like Chuck Close, Christo and Robert Mangold, all of whom counted the Vogels as their patrons from day one. While the Vogels aren’t particularly sophisticated when it comes to talking about art (they essentially buy what they like), they’re so down-to-earth, you can’t help but fall in love with them. No wonder so many artists were willing to give them a drastic discount. *** (Jeff Niesel)

Jeff has been covering the Cleveland music scene for more than 20 years now. And on a regular basis, he tries to talk to whatever big acts are coming through town, too. If you're in a band that he needs to hear, email him at [email protected]levescene.com.
More
Scroll to read more Movie Reviews & Stories articles
Join the Cleveland Scene Press Club