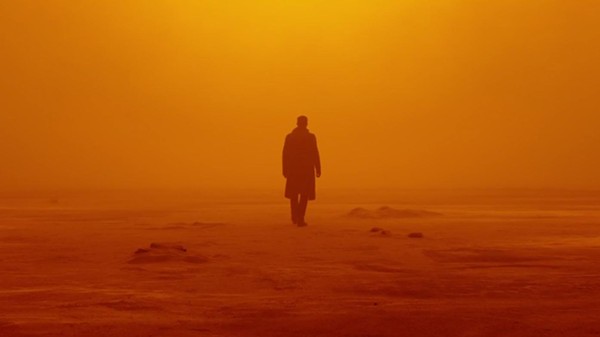 Blade Runner 2049
Below, I've assembled my ten favorite films of 2017, a task that should have been straightforward, given my rating system, but which nevertheless became an agonizing process of continual shuffling and reassessment.

These days, I grade movies on a 25-point scale: five points for script; five for acting; five for technical elements (visual effects, editing, sound (incl. score); five for aesthetic elements (cinematography, production design, costumes, etc.); and five for something I stupidly call "style points" which amounts to a personal bonus. I gave Wonder Woman a five in the style column, for example, because it was the first superhero movie to both star and be directed by a woman. I am the arbiter of style, is the point.

The majority of the movies I saw in 2017 were scored in the 12-18 range, basically B and C grade territory. No film achieved a perfect 25 this year, though I'm always amending my rankings. Just this year, I re-watched Peter Jackson's King Kong (2005) and elevated it from a 23 to a 25, joining Christopher Nolan's The Prestige as my other 25 from that year.

I have not yet seen the following movies, which all have the potential to be inserted near the top of my annual list: Downsizing, The Greatest Showman, Ferdinand, The Florida Project, The Square, Suburbicon, Happy Death Day, Ingrid Goes West, Good Time.

The following were ranked 20/25: Mother!, Logan, It Comes at Night, Battle of the Sexes, Wonder Woman.

The following were ranked 21/25 and just missed the Top 10: Star Wars: The Last Jedi, Stronger, Phantom Thread, The Shape of Water.

Young German actress Paula Beer is a revelation in this devious, soft-spoken drama from Francois Ozon (Swimming Pool, In the House). In the aftermath of WWI, a grieving German woman mourns the death of her fiancé. A mysterious Frenchman comes to town. It’s a black-and-white, under-the-radar gem that keeps you guessing at every turn. It also concludes with one of the best kisses I’ve ever seen on screen.

Though the fanfare has quieted somewhat in light of Kevin Spacey’s sexual misconduct allegations, this sonic boom of a heist film was the early summer’s surprise smash hit. The script sizzles like bacon and cracks like a whip in perfect time with a pulsing soundtrack. Even without the expertly staged car chases — just as fun (and way more plausible) than The Fate of the Furious’s – this movie would be a livewire. It leaps off the screen.

If you can stomach it, Raw is one of the more forceful coming-of-age films in recent memory. The press focused on its viscera – viewers walked out in disgust on the festival circuit – because, well, it chronicles a young French veterinary student who stumbles upon an addiction to human flesh. But the story is rich in metaphor and striking in its portrayals of sisterhood, aberrance, hazing, sex and fear. Though less publicized, Raw is every bit as scorching a cinematic debut as Jordan Peele’s Get Out.

(Scene review by Sam Allard, 4/5/2017, "...bold and probing and fearlessly weird. It marks Ducournau instantly as an assured and adventurous voice in a French milieu that has already been known to push boundaries in the horror genre.")

A painstaking illustration of the inefficiency and inhumanity of government bureaucracy, as seen through the lives of a 59-year-old carpenter and a young single mom who become friends as they seek social benefits in Scotland. Searing scene work from the director of 2006’s The Wind that Shakes the Barley.

Christopher Nolan strikes again with this crisp and exhilarating WWII drama. On an IMAX screen, the harried allied evacuation of Dunkirk beach is brought to huge and vivid life. With limited dialogue, the genius of the script lies not in the characters but in the various time signatures. Three concurrent narratives – land, air and sea – each frenzied and heartrending in its own way, converge upon a stirring climax from different starting points. It’s yet another innovation from the narrative maestro who gave us Memento.

Easily the best and most original premise of the year, this horror-comedy from Jordan Peele (of Key & Peele fame) exploded onto the scene in February and will finish the year in the box office’s top 15, ahead of installments from the Pirates, Transformers and Cars franchises – no small feat. Peele’s film is a biting social commentary with pitch-perfect supporting performances surrounding Daniel Kaluuya, playing a young black photographer who discovers, to his horror, a form of racism neither he nor we have ever seen before.

Taylor Sheridan, who wrote the scripts for both 2015's Sicario and last year’s Hell or High Water, now seems to be Hollywood’s authoritative voice on crime dramas in the American West. This alternately haunting and gripping neo-Western murder mystery follows a tracker and an FBI agent (Renner and Olsen) as they investigate the death of a native woman on a Wyoming reservation. Rural (and in particular, native) poverty is deftly and unblinkingly represented, as is the elevated threat of sexual assault for native women. The self-propelled narrative is as emotionally charged as The Snowman wasn’t. A brilliantly staged standoff at an oil outpost is in contention for the year’s best scene.

This sequel that no one asked for or expected is nevertheless the year’s most visually arresting cinematic experience. Its colors, its textures, its locations, its tech – all of it amounts to a more vibrant, more interesting, more unique and more fully realized world than just about every half-baked dystopia or turgid space opera that viewers get each year. (It leaves the accomplished Last Jedi in the dust.) With a script as dark and mercurial as Blade Runner (1982), this cyberpunk noir epic both honors and vigorously builds upon its predecessor.

The conventional award-season wisdom is that the Best Actor Oscar is Gary Oldman’s to lose (for his turn as Winston Churchill in The Darkest Hour). But I’m here to stump, loud and often, for Andy Serkis, for his mastery as Caesar, the simian protagonist of the thrilling Apes trilogy. This third (and hopefully final) installment takes the franchise’s visual effects to new, staggering heights. Furthermore, its terrifying vision of radical ideology and violent prejudice couldn’t be more resonant in today’s political climate. War is a monumental capstone that manages to eclipse 2014’s fantastic Dawn of the Planet of the Apes, and is anchored, once again, by Serkis’ career-defining lead performance.

(Scene review by Sam Allard, 7/12/2017, "...a must-see ... CGI as eye-popping and precise as anything the field has yet produced ... One hopes that the producers will not sully the franchise by contriving a string of weak followup episodes after this splendid trilogy has ended with such power and elegance.")

Picture, Director, Screenplay, Actress, Supporting Actress. If it doesn't win all five Oscars — and it's a long-shot, I know — it should most certainly be the front-runner in many of those categories. Greta Gerwig has wowed audiences nationwide with this marvelous place-based coming-of-age film. Its script bristles with literary intensity as it renders a volatile relationship between a teenage daughter and her mom with more clairvoyance and painful accuracy than anything I've ever seen. The attention to detail, and Gerwig's affection for her characters and her hometown, is joyously evident in every scene. A triumph.

(Scene review by Sam Allard, 11/15/2017, "...marks Gerwig as an artist of equal talent and creative force — originality, spunk and heart — on either side of the camera.")