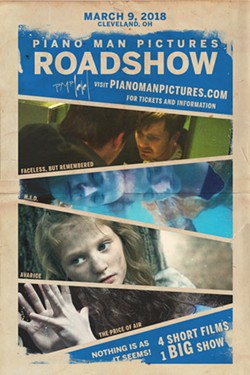 Piano Man Pictures, a collective of Memphis-based filmmakers, writers and artists that writer-director Shelby Baldock co-founded with writer-director Chad Allen Barton in 2010, aims to “bring meaningful stories to life, no matter the medium.”

Baldock, who holds an MFA degree from Chapman University’s Dodge College of Film and Media Arts, has worked for the Grammys and toured with the North Mississippi All-Stars, and Barton has written, produced and directed several short films.

The two come to town on March 9 with their films and with films by fellow writer-directors Rachel M. Taylor and Stephen Teague to present the Piano Man Pictures Roadshow at Forest City Brewery as part of the monthly Emerge Microcinema event that the brewery hosts.

Baldock says the concept for the traveling program began when he started to add up the money he was spending on submitting his movies to film festivals.

"When you start spending money on film festival fees, you realize your batting average isn’t that great," he says. "You pour all this work into these things and you want something to come from it.”

From touring with the jam band North Mississippi Allstars, Baldock was familiar with most major American cities. He started remembering all the theaters he had seen in the various places where the band played, and he thought it might be cheaper to book the Piano Man Pictures films himself and circumvent the pay-to-play festival circuit.

“We just started thinking that once we had enough projects through Piano Man, we could bypass the festival rejections," he says. "We want to turn [showing the films] into something more vibrant and lively. We started looking at the map a year ago and put together this short Midwest stretch.”

He describes his short film, Faceless, But Remembered, as a “nice way in” to the festival.

“It’s both a drama and a genre bending personal movie about my feelings of life after a kidney transplant but tossed into thriller territory with some science fiction and horror," he explains.

The program’s second film, Barton’s HID, centers on a woman who seeks out a drug dealer to get the medication she needs. “[Barton] really drifts off into David Lynch territory with his film.”

Baldock describes Taylor's Avarice as “high concept fantasy with no dialog” and posits that Teague's The Price of Air is "a weird surreal conspiracy theory comedy."

“You won’t come in here and see movies that are stepping stones,” he says. “We really care and we put a lot of work into them. We want to entertain, and we have our own individual voices. It’s not just a bunch of films touching on topics because we think that’s what people want. I think people might be surprised because it’s not following any kind of trend. It’s not catering to anything else. We’re just trying to do what we love, and we think people will have a good time watching them.”