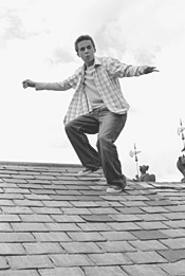 Our mild-mannered hero is once again called upon to save his country.
Which is cooler: the snazzy cars, high-tech gadgets, hot babes, and kick-ass fighting, or knowing that you are saving your country and maybe even the world from the clutches of assorted power-hungry and sinister bad guys? Sixteen-year-old Cody Banks gets to enjoy it all in his second cinematic outing as a junior James Bond.

The first Agent Cody Banks, released just a year ago, proved a big hit with young viewers who enjoyed the Spy Kids series but considered themselves more sophisticated than that franchise's pre-teen hero and heroine. Cody (Frankie Muniz, of TV's Malcolm in the Middle) -- 15 in the first film and 16 now -- is an average-looking, typically geeky-acting kid, who gets to live out the secret-agent fantasy of millions of teens and pre-teens.

Agent Cody Banks 2: Destination London finds our mild-mannered hero once again called upon to save his country. The film opens at Camp Woody: to all appearances a swimming, canoeing, camp-song-singing summer camp, but in reality, a CIA-sponsored training facility for carefully selected junior spies. Of course, none of the parents, including Cody's mom and dad (played once again by Cynthia Stevenson and Daniel Roebuck), know of their children's CIA affiliation or the true nature of the camp.

When Victor Diaz (Keith Allen), Cody's CIA-camp instructor and an agent for 20 years, steals top-secret mind-control computer software from the Agency and flees to London, Cody is sent after him. Posing as a musical prodigy, the decidedly nonmusical Cody enters an elite international music school to spy on the school founder's disreputable husband, Kenworth (James Faulkner), who is in cahoots with Diaz.

Cody's new handler is Derek (Anthony Anderson), an American who has been posted to England -- where apparently very little happens -- as punishment for botching an earlier assignment. Derek, who poses as the music school's new chef, is hoping to work his way back into the good graces of the Agency. Unfortunately, his nose for spy work is on a par with his culinary skills.

Along the way, Cody encounters Emily (Hannah Spearritt, a comely young British lass who resembles Kirsten Dunst), a teen agent for the British Secret Service. It will come as no surprise to anyone that, working together, Cody, Emily, and Derek outsmart the bad guys.

A sequel to the first Cody Banks film would seem to be a slam-dunk, given that the premise, characters, and situations lend themselves so readily to different adventures. But Destination London doesn't match up to the original. First of all, why send Cody all the way to London and not immediately pair him with an English agent? Emily assumes a larger role as the story progresses, but why not match them from the start? With Cody and Derek together so much, the story might as well have stayed in the U.S.

Second, Harald Zwart (director of the first Cody Banks film), Dylan Sellers, and Don Rhymer, all of whom concocted this story, turn most of the Brits into either ridiculously daffy types or jerks with dismissive attitudes. How much better it would have been had they devised obstacles for Cody that reflected England's very different attitudes, manners, and mores. (George Bernard Shaw famously remarked that "England and America are two countries separated by the same language." In fact, they are separated by much more, and the filmmakers could have had some fun with that.)

The filmmakers reportedly wanted the sequel to focus less on action and more on comedy. But the humor they have come up with is silly, generic, and broad, such as Derek spilling big vats of liquids and tripping over objects in the kitchen. Either Anderson's timing is off, or the stunts are just too tired to work.

Cody Banks 2 is still a movie that kids can enjoy and that families can watch together. (Despite lots of fighting, not one drop of blood is shed, and not even the villains seem the worse for wear.) The sequel feels more juvenile than the first film, but that may be the perspective of an adult viewer. The opening camp scenes will be the most fun for kids in the audience, who surely will wish that their summer camps offered classes in grappling, defusing bombs, and operating mini-tanks.