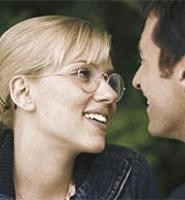 Johansson and Jackman are bound in an improbable romance -- and film.
For 35 years, Woody Allen was a long shot to stray into the Bronx or Staten Island -- much less the alien reaches of London. The creator of Manhattan has always been joined to his chosen borough like pastrami on rye -- so when he ventured abroad last year to direct the intriguing morality tale Match Point, moviegoers were taken aback. George Bush doesn't join the Taliban; Woody Allen doesn't cross the East River.

Allen should have concluded his expatriate foray with Match Point. The second straight film he's made in London -- an alleged return to comedy called Scoop -- is so flat, dull, and off-form that it seems to have been conceived in a fog. Not only does it lack the verve and energy of Allen's best New York-based work; it feels culturally adrift, like some bewildered tourist trying to read a city map held upside down. For years, even some of the staunchest Allen fans have suspected that his best days are behind him. But when his famously neurotic one-liners start to bomb, there's real trouble. At the very least, the filmmaker might have borrowed some of the brilliant mischief of this movie's vastly superior namesake, written by the great British satirist Evelyn Waugh. Alas, he doesn't.

The latest object of Allen's affections -- at least in the dramatic realm -- is the nubile Scarlett Johansson, who portrayed a demanding, self-absorbed actress in Match Point and returns here as Sondra Pransky, a naive American journalism student who's visiting a friend in London when she inadvertently stumbles onto what may turn out to be the murder scandal of the decade. The bespectacled Sondra's reportorial skills are limited, to say the least, but she's not above a bit of feminine guile. Make what you will of Scoop's first scene: The heroine pursues into a London hotel lobby a horny movie director who's about three times her age and, instead of getting an interview, lands in his bed. If, in Allen's scheme of things, wishful thinking here merges with autobiography, so be it. It's a bit tougher to accept the filmmaker's appearance in Scoop as a professional magician named Splendini, who specializes in "dematerializing" women by means of a double-paneled box. Here is Allen as stammering self-parody: a pent-up bundle of tics and quirks so irritating that, halfway through, you may feel like ending the misery (his and yours) by clamping an ether-soaked rag over that long-beloved old face.

As it is, Splendini -- aka Sid Waterman, an old-fashioned vaudevillian to the bone -- becomes the unwitting agent of Sondra Pransky's investigative and romantic adventures. Plucked from the audience and secreted away in his magic box, the young woman is unexpectedly accosted there by a renowned (albeit recently deceased) London newspaperman named Joe Strombel (Deadwood's foul-mouthed Ian McShane). Frustrated that he can no longer get the story himself, the avuncular Joe puts Sondra on the trail of a suave nobleman named Peter Lyman (Hugh Jackman), whom the dead reporter insists is London's new version of Jack the Ripper, an elusive monster known to the Fleet Street tabloids as "the Tarot Card Killer." Like Humphrey Bogart in Play It Again, Sam, canny Joe becomes the protagonist's guide and mentor from beyond the grave.

As if this supernatural turn of plot were not familiar enough, Allen also insists on having Sondra -- posing now as "Jade Spence" -- fall in love with the dashing and possibly dangerous Peter, even as she snoops into his secrets. In a goofier development, she also recruits the reluctant Sidney to play the part of her father, "Mr. Spence," who's quickly drawn into the chase. The notion of a phobia-rattled Jew from New York dropped into the staid Protestant garden parties of upper-crust London could have provided Allen with one of his richest comic spectacles. But he doesn't make much of it beyond attacking the buffet table and startling the guests with a couple of ancient card tricks. "I was of the Hebrew persuasion," Sidney says of his origins, "but I converted to narcissism." That's about the pinnacle in the wisecrack department, and as far as pursuing the suspected killer goes, the director did that in much funnier fashion back on home turf in Manhattan Murder Mystery.

In the end, the semi-dimwitted Sondra gets her man, and Sidney Waterman winds up, like Joe Strombel, in limbo -- here portrayed as a tramp steamer adrift on a fog-shrouded sea -- standing among a group of baffled "passengers" who are wondering where they're headed and why. Given the inertia of Scoop and the uncertain course of Allen's career as it enters twilight, it's an appropriate final image.