Loud and Bobnoxious Cult Movies: Girl on a Motorcycle 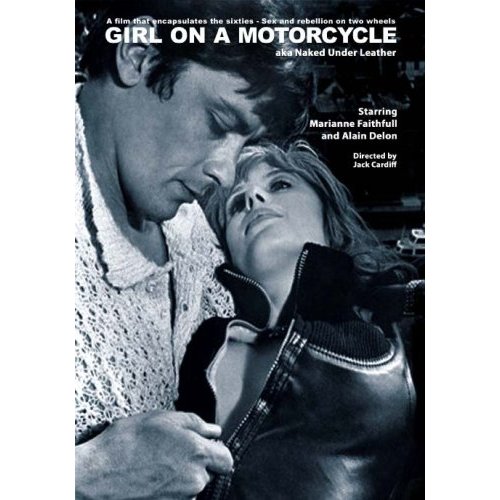 Recently issued on DVD by Redemption video, the 1968 film Girl on a Motorcyclecertainly lives up to its title. A significant portion of its running time consists of young, black leather clad Rebecca (Marianne Faithfull) riding her bike through Europe to visit her lover Daniel (Alain Delon), possibly leaving husband Raymond (Roger Mutton) behind for good. We get the inside scoop on Rebecca’s love life via flashbacks and the occasional trippy dream sequence, not to mention her running voice over of practically every thought that pops into her head.

The film is directed by Oscar winning cinematographer Jack Cardiff, and the best thing about the movie is its photography. Whether it’s the German and Swiss countrysides zipping by or the warmly lit interior of a ski lodge, the movie looks beautiful. It’s also pretty dull as it tries to stretch a thin premise to feature length. Marianne Faithfull certainly looks iconic in the lead role, but her flat performance further drags the movie down. Kitsch fans can take some enjoyment from the solarized photography, groovy fashions, fondue parties, and lounge-delic soundtrack, but the film’s free love philosophizing is taken so seriously it starts to make celibacy seem more appealing. Perhaps the most interesting aspect of the movie is its ending. It’s not handled particularly well here, but there are some definite similarities between this and Easy Rider, which came out the following year.

Maybe in the context of the time it was made, Girl on a Motorcycle would have seemed edgy and important, but that impact has faded with time, leaving the film’s flaws more evident. It isn’t quite good enough or quite bad enough to recommend, but it might be worth a look if you’re interested in the era. I imagine most viewers won’t make it to the end of the ride, though. **1/2