As the contributor behind a regular feature on our film blog called "Loud and Bobnoxious Cult Movies," Bob Ignizio will regularly contribute reviews of b-movies and horror flicks that might not have gotten the attention they deserved when they were initially released. Whether the films just had a short run in theaters or went straight to video, Ignizio is here to provide commentary. What follows is his review of Timecrimes, the debut from Spanish director Nacho Vigalondo. 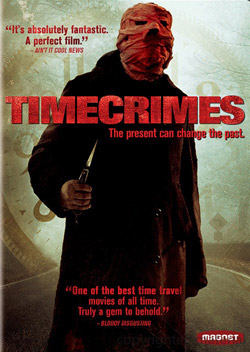 Timecrimes, the debut film from Spanish director Nacho Vigalondo, is one of the more entertaining films about time travel I’ve seen. Hector (Karra Elejalde) is the everyman protagonist who just wants to relax in the backyard of his new house and scope out the countryside with his binoculars. As Hector’s wife Clara (Candela Fernández) prepares to go out and pick up a few things for dinner, Hector spies an attractive young girl (Bárbara Goenaga) undressing in the woods. Distracted by his wife as she leaves, when Hector looks through the binoculars again the girl appears to be unconscious on the ground. Hector goes to investigate, only to be stabbed and chased by a strange man whose head is wrapped in pink bandages. Hector finds sanctuary in a nearby research facility where he is hidden in a tank by the lone scientist on duty, El Joven (director Nacho Vigalondo). To Hector’s surprise, the tank turns out to be a time machine that sends him back a few hours into the past.