T3's a pretty good flick that's pretty much the same as the last one.

Terminator 3: Rise of the Machines 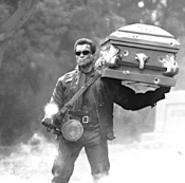 As with "hilarious Islamic comedy" or "sublime Affleck picture," the term "terrific second sequel" isn't bandied about too much. Generally, creative juices are drained by Part Three, which makes Terminator 3: Rise of the Machines a gamble. In 1984, those pesky machines tried and failed to destroy humanity, albeit on a tight budget. Then, in 1991, they tried and failed again, on a huge budget. Then 12 years of real time passed. Exactly what is left to say?

Not much, it turns out, but it's reasonably thrilling anyway. If you're hoping for a brilliant revisionist take on the franchise, forget it. Exactly as David Fincher did with the abysmal Alien 3, director Jonathan Mostow (U-571) simply runs James Cameron's discarded toys through their expected paces, while smearing them with industrial-strength doom. The difference is that Mostow serves up generous kicks en route to Armageddon. While he's obviously delusional, calling Arnold Schwarzenegger's Terminator "perhaps the most famous character in the history of motion pictures" (comments any, Yoda?), he loves his work, and it shows -- even while he's turning cartwheels to distract us from his narrative's inherently superfluous nature.

Plotwise, this sequel's almost exactly like the last one, with another advanced-model Terminator robot sent back in time from the future to kill humanity's only hope. (Why these lamebrained machines don't just go back to the friggin' Mayflower and kill humanity's-only-hope's ancestral predecessors is never explained; my pencil sharpener is smarter.) Reluctantly heroic John Connor, spawn of Linda Hamilton and Michael Biehn (both absent), has ceased being young Edward Furlong and has transformed into 18-year-old Nick Stahl (the murdered kid from the overrated melodrama In the Bedroom). Connor's been surviving incognito on the mean, dirty streets of L.A. and has sunk so far into depression that he actually drinks Budweiser. His mission now is to allow Schwarzenegger's reprogrammed, outmoded Terminator robot to save him, so he can save humanity. Again.

See, the problem facing the three billion people about to be executed by the Skynet weapons grid is that an ill-tempered blonde has landed in Beverly Hills. Horrors! As the lethal and ostensibly invulnerable T-X, or "Terminatrix," Kristanna Loken is meaner, stronger, and faster than Robert Patrick's T-1000 in Terminator 2, and she makes one pine for good-natured robot ladies like Jamie Sommers. Those sweet days are gone, though, and although Loken's pout is decidedly silly -- meaner girls await you at the mall -- she's got one hell of an arsenal and knows how to work it.

That said, if you have affection for this series, you'll get a great charge out of T3's first 90 minutes. The movie's basically one long chase, punctuated with moments of glib tenderness between Connor and his accidental soulmate, sweetheart veterinarian Kate Brewster (Claire Danes). We get the requisite techno-nightmares, the shattering glass, the heavy artillery, the poignant longing for parents, and -- bless everyone involved -- a mostly engaging load of fun.

Apart from truly terrific stunts -- including a road-rager that outstrips The Matrix Reloaded -- it's T3's cute touches and cunning demographic-charting that save it from pointlessness. Tellingly, Arnold looks disturbingly like California Governor Gray Davis these days, but his dry wit's never been sharper, either when he's venting his apparent jealousy of Elton John (love those star-glasses) or deadpanning lines such as "Anguh iss moh usefo dan despaih."