The Alamo gets what it always needed -- a happy ending!

Send a News Tip
The Alamo 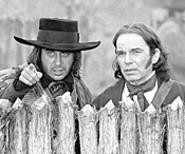 It doesn't look good for our heroes. Well, not at first, anyway.
It is, to those of us born and raised in Texas, the Greatest Story Ever Told and Retold; who can forget the Alamo when it's on every Texas history class final exam? At 5 a.m. on March 6, 1836, some 189 Texian soldiers and volunteers were slaughtered while trying to protect a former mission from Mexican President Antonio López de Santa Anna's army. It is not, one would think, the best material from which to make a movie: The battle lasted a mere 90 minutes, the bad guys won, and all of its top-billed performers (Jim Bowie, Davy Crockett, William Travis) were killed, Travis just as the shooting started. Of course, that has not stopped filmmakers from putting the story on celluloid, beginning with 1911's The Immortal Alamo; hey, at least it wasn't too talky. The most famous is John Wayne's epic 1960 production, which only seemed to last as long as the 13-day siege, but the best may be Frank Lloyd's The Last Command from 1955, from which Burt Kennedy would use the battle scenes for his 1987 made-for-TV Alamo: Thirteen Days to Glory.

But, as The Alamo's director and co-writer John Lee Hancock says throughout the press materials, all of these films lacked historical accuracy, more than suggesting his take is the only one of merit. Let those other tales make myths of men; the native Texan Hancock's will make men of myths. And so we have a Davy Crockett (Billy Bob Thornton) who prefers to be called David and refuses to wear the coonskin cap unless it's "really cold"; a William Travis (Patrick Wilson) who admits to gambling, whoring, and abandoning his pregnant wife; a Sam Houston (Dennis Quaid) who stays away from San Antonio not to form an army but to draft a constitution and form a government at Washington-on-the-Brazos; and a Jim Bowie (Jason Patric) who spends the majority of the film confined to a bed to slowly die of typhoid and consumption. And, because they have little else to do but talk and talk and talk until Santa Anna's attack late in the movie, the Holy Trinity have plenty of time to debunk their own mythology to each other. "People expect things," Crockett says of living up to his legend, addressing the ragtag army of Texian regulars and militiamen, but talking as much to the audience who, Hancock believes, only knows part of the story he will reveal in full.

But, truth really be told, there is nothing new here; Hancock's Alamo is like a cover of a song you know by heart, with minor changes made here and there but otherwise recognizable. (One of the oddest alterations is Emilio Echevarría's Santa Anna, turned into a preening, teeth-gnashing big-screen baddie who looks like an aging drag queen in Napoleon's hat.) The result is something that feels very much like an overachieving made-for-TV movie -- a history lesson dolled up like an action movie, with the action relegated to the final third, and even then, the battle is over before it really begins.

Hancock, whose The Rookie proved the only thing more boring than watching a Texas Rangers baseball game is watching a movie that ends at a Texas Rangers baseball game, is stuck in an untenable situation. To make the movie more realistic, more honest, he strips away the haze of legend to give us people talking about dying and waiting to die; they know they're doomed, as much as we do. But in doing so, Hancock and his legion of screenwriters (including Traffic's Stephen Gaghan) and historians and technical advisers make these men impressively uninteresting and unsympathetic -- guilt-ridden soldiers, in the case of Crockett, or drunken louts, in the case of Bowie, who disappears from the movie for long stretches and is usually seen sweating or hallucinating images of his dead wife. We like our heroes larger-than-life in the movies; here, they shrink to the point of invisibility.

What's even more perplexing is that Hancock shies away from showing any bloodshed during the fall of the Alamo; it's a PG-13 massacre, which guarantees a lifetime of screenings in Texas middle schools but ultimately strips the battle of its shock and significance. It has all the impact of watching extras fall down on command. (Audiences weaned on the Lord of the Rings films, with their ostentatious castle-storming sequences, will find The Alamo downright timorous.)

But most galling is how Hancock has given The Alamo the Pearl Harbor treatment; he may be the anti-Michael Bay, refusing to fetishize the violence or cower before the gods of computer animation, but he has learned how to turn an inspirational tragedy into a real crowd-pleaser, yee-haw. Every film made about the fall of the Alamo ends with the slaughter -- the teary finale, followed by the solemn coda during which the audience is asked to mourn in silence as they head for the exits. Not this time. Here, Hancock is in full Michael Bay mode, tacking onto his story of sacrifice a final tale of heroism and victory: Houston's defeat of Santa Anna and his forces in the field at San Jacinto, which led to Santa Anna's surrendering of Texas. An Alamo with a happy ending -- now, that is revolutionary.