A well-meaning ode to golf's first legend ends up in the bunker. 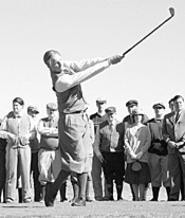 Jim Caviezel made a more convincing Jesus.
Pour a couple of Old Fashioneds into the average golf historian, and it won't be long before he gets misty-eyed over Robert Tyre Jones Jr.

Jones not only ruled golf in the 1920s, the fellow will tell you; he also epitomized the gentlemanly ideal of the old Scottish game, transplanted to Atlanta, Georgia. Decked out in his impeccable plus-fours and jaunty bow tie, this profoundly gifted part-time amateur played purely for love of the game and declined to turn pro, even after winning 23 of the 52 tournaments he entered -- including 13 majors and the only Grand Slam ever. Instead, he retired from the tournament circuit at age 28 to write, practice law, and tend his family. Clearly, the modest Jones shared nothing but fame with his few peers in the so-called Golden Age of Sports, standing above Babe Ruth's rough bluster and the entirety of Jack Dempsey's brawling, bloody trade.

Bobby Jones, reverent history tells us, was the soul of golf, even to the painful spinal disease he endured without complaint for four decades. Palmer? Nicklaus? Tiger? Here was the father of them all.

In its dim, struggling way, a new biopic, titled Bobby Jones: Stroke of Genius, perpetuates the myth -- it was, after all, authorized by the famously private and protective Jones family. But the movie has no organic feel for the game, and it shows us neither Jones's celebrated grace nor the otherwise well-documented pleasure he took in overcoming an explosive temper and early adversity to become the greatest champion of his day. All we see is dogged, joyless resolve, as if the poor guy were swinging a pickax on a chain gang, instead of beating the best golfers in the world at St. Andrews or the U.S. Open. Held in that light, the actor who portrays Jones is a weirdly appropriate choice: When we last saw Jim Caviezel, he was being scourged and crucified in The Passion of the Christ.

But Mel Gibson is a more fluent director than one Rowdy Herrington (Jack's Back, A Murder of Crows), who squanders the dramatic riches of Bobby Jones's life on third-rate caricature and the kind of prosaic, paint-by-numbers storytelling we find in made-for-TV movies. For instance, Jones's greatest post-career achievement, his co-design of Augusta National, home of the Masters (and, lately, of some fiery political bickering), is dispatched in a final scene that looks like a slick real-estate commercial. The hard-trying Caviezel has some new crosses to bear -- including dialogue straight out of an eighth-grade play. "The longer I play this game," he reveals to us, "the harder it gets." Really? The longer we watch, the harder that gets. By the time Herrington finally drags us through Jones's climactic 1930 season, in which he wins all four major tournaments, it feels as if the filmmaker's been loading huge bags of saccharin onto our backs for two hours. Poor Bobby. He's been reduced to a neatly tied bundle of virtues, a mere god.

Meanwhile, the golf looks (and sounds) fake, despite dozens of period-costume changes and some nice views of the links. Anyone who remembers William Bendix trying to swing a bat in The Babe Ruth Story or, for that matter, Kevin Costner's five-iron flailings in Tin Cup will find Caveziel's unconvincing efforts grimly familiar, and cinematographer Tom Stern's skimming aerial shots -- the ball's-eye view! -- look like something dreamed up in film class. The supporting characters don't fare much better. Jones's beloved wife, Mary (Claire Forlani), is little more than a snapshot of long-suffering, while his inseparable traveling companion (and resident sycophant), Atlanta sportswriter O.B. Keeler (Malcolm McDowell), serves as the font of all wisdom, albeit secondhand. Employing what could generously be called dramatic license, Herrington and two co-screenwriters attribute to Keeler Grantland Rice's oft-quoted line that Jones had "the face of an angel and the temper of a timberwolf," and they later give him credit for some Kipling, too -- that business about meeting triumph and disaster, and treating those two impostors just the same. This O.B. even feels the need to play prophet: "Money," he warns, "is going to ruin sports." Thanks. We'd never have known.

Most distressing of all, Stroke diminishes the most colorful of Jones's on-course rivals, Walter Hagen (Jeremy Northam). A cocksure playboy who drank, gambled, and sometimes showed up at the first tee in his tuxedo, badly hung over, Hagen was a hustling pro who played for money and disdained high ideals -- a reckless spirit of the Jazz Age. Here, he's just a rough sketch, a cartoonish anti-Jones. But one beguiling glimpse of him may have you hungering for more: What a great movie he would make. As for Gene Sarazen, the other dominant player of the era, he's simply nowhere to be found.

In the end, neither is Bobby Jones. So profusely does this clumsy, well-meaning biopic encrust the myth with new layers, we can scarcely see the human being. And that's a crying shame.