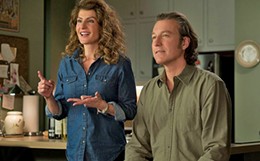 The first My Big Fat Greek Wedding, a comedy about a sometimes suffocatingly close-knit immigrant family and star-crossed love, hit the big screen in 2002. The surprise hit film came out so long ago I actually had to look those details up online. I vaguely remembered it as a greatly simplified Greek Moonstruck and was pretty sure I had liked it. And with the always funny Lainie Kazan and Andrea Martin as the meddling matriarchs and the not-hard-to-look John Corbett from Northern Exposure as the romantic lead, what was not to like?

But the minute the lights went down for the advance screening of My Big Fat Greek Wedding 2, it all came flooding back to me. Although visibly older, the endearing cast of admittedly stereotypical characters—self-doubting Toula (Nia Vardalos, now the mom of a college-bound daughter), her boisterous nationalist father Gus (Michael Constantine) and the inscrutable oddball Yiayia (Bess Meisler)— resumed their roles with a comfortable familiarity. They were, well, like family.

In this story, time has transformed the once-desperate-to-escape Toula into the needy, overly protective parent whose smothering tendencies have her daughter Paris (Elena Kampouris) applying to out-of-state colleges. While seen as the family fulcrum (“You have to fix this, Toula” is a staple of pretty much any scene that involves the relatives), Toula isn’t as successful and worldly as she once dreamed she’d be. Her insecurities and her family obligations have all but extinguished the romance at home and any attempts to rekindle the flame are thwarted by late nights working at the diner, nosey neighbors and emergency calls to pry pop out of the bathtub.

But Toula’s troubles are subplots. The real story comes when her parents, Gus and Maria (Kazan), discover through a clerical error that the priest never officially married them. “Look at me,” chortles Maria. “I’m a hippy!” When Maria asks her longtime love to do it all—the proposal, the party and the ceremony—over, broad comedy ensues. And yet, among the jokes about gaudy pink limos and flashy, borrowed tuxedos emblazoned with a band name (a very effective visual gag), there’s a poignancy about a couple whose past and futures are intertwined. Gus’s surprisingly authentic-feeling speech about not being able to sleep without his wife’s snore reveals his own vulnerability and the movie’s inherent charm.

When the original My Big Fat Greek Wedding came out, Vardalos was a total unknown, and the movie was a sleeper hit of epic proportions. Now, expectations are high and everyone’s a critic just itching to take the sequel down with their snarky wordplay headlines. Sure, some of the character development is laughably minute. Yes, a little of the tries-too-hard dialogue feels like a sitcom fodder. And I definitely cringed when, on hearing her daughter’s college choices, Toula whines, “But why are you leaving me?” Still, the big fat truth is, for all its faults it’s a sweet, funny, feel-good film that you’ll probably really enjoy if you just let yourself.

Get a Load of Adam Driver in Teaser Trailer for Netflix Movie White Noise, Filmed in Cleveland