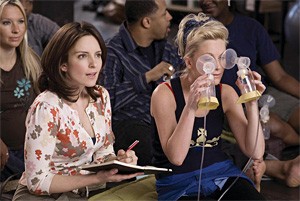 Could have sworn I've seen this episode of Baby Mama before, when it aired on Tina Fey's prime-time gig, 30 Rock. It was funny the first time around, when Fey, as late-night-TV exec Liz Lemon, found herself drawn to the sound of cooing and the scent of baby powder. After a poorly placed phone call to the world's worst fertility/meth-addiction doctor, Lemon wound up snatching an adorable tyke from a hairdresser — totally by accident, but still dark, weird stuff.

Baby Mama>extends the joke, then softens it, then smothers it in its crib — an unpleasant picture perhaps, but not any more disagreeable than the phrase "Produced by Lorne Michaels."

Fey's now called Kate Holbrook, and instead of an NBC TV exec, she's a VP at a Whole Foods knockoff called Round Earth. She works for a ponytailed boss, played by Steve Martin as a puffy hippie-dippy dope who rewards his execs with things like five minutes' worth of uninterrupted eye contact. (Martin hasn't been so deadpan or dead-on in ages.)

Kate, of course, wants a baby: She visits a sperm bank, consults doctors, and plasters her apartment with Post-it notes bearing such think-positive aphorisms as "Yes! Be Fertile!" But as the Coen Brothers put it in Raising Arizona, her insides are a rocky place where a man's seed can find no purchase. Kate outsources her pregnancy for $100,000 and winds up with a "dumb white-trash" couple on her doorstep: Angie Ostrowiski (Poehler) and her husband Carl (Dax Shepard). Poehler doesn't seem sure what to do with Angie, who occasionally speaks in a hillbilly accent — unless it disappears altogether, and she's just Amy Poehler killing time till the next commercial break.