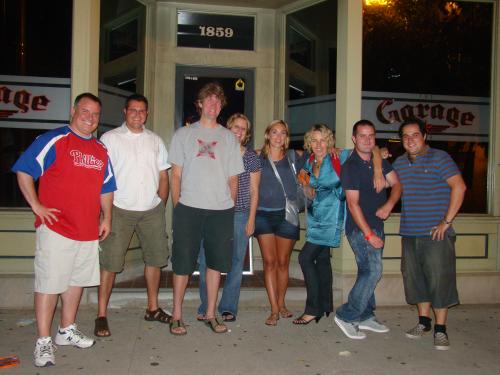 Yesterday, journalists from the Irish travel show No Frontiers rolled through town to take footage of Cleveland for a special on traveling in the States by Amtrak. First, they went to Nighttown for lunch where they met with owner Brendan Ring, who took them for a ride on his boat up near Bratenhal. Then, they went to the Rock Hall and checked out the Springsteen exhibit. They were supposed to throw out the first pitch at the Lake Erie Crushers’ game, but they didn’t have time to get to the game and instead spent the rest of the evening bar-hopping, stopping at Great Lakes Brewery (where they thought the beers were “brilliant”), the Garage and finally Prosperity Social Club where owner Bonnie Flinner was enlisted to drive them (in her vintage convertible) to the train station for a 2:45 a.m. train to Chicago. How good of a time did the crew, hosted by several Positively Cleveland delegates, have? Well, they didn’t want to leave Prosperity, where they had the jukebox turned up to full volume so that slightly inebriated show host Kathryn Thomas could dance. And they regularly praised Cleveland and called the Windy City “a wannabe New York.” Not sure when the show will air but once it does, it’ll be posted at rte.ie/travel/nofrontiers/index.html.