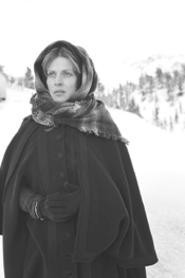 Nastassja Kinski stars in The Claim.
There's a majesty to Michael Winterbottom's new film -- a majesty and a terrible, icy chill. There's also a fair bit of invention, as the director of the wrenching Jude -- based on Thomas Hardy's Jude the Obscure -- has shifted the locus of that author's fierce, beloved English West Country to the much fiercer Sierra Nevada mountains of Northern California. Set 20 years after the Gold Rush of 1849, The Claim focuses on the tiny town of Kingdom Come, a lofty wooden outpost sprouting from a frozen, mountainous wilderness. Here, high hopes mingle with harsh exploitation, as a frontier is slowly carved up by human desires.

Once again proving himself an exceptional Hardy boy, Winterbottom has turned to The Mayor of Casterbridge for his inspiration this time around. As we explore the town, self-appointed mayor Daniel Dillon (Peter Mullan) is clearly established as the law. There's a restlessness afoot, a sense of great transition as cultures clash and nobody knows exactly what they're doing out in the frozen wastes, so Dillon, the richest man in Kingdom Come by far, holds court not only as mayor, but as king.

These are the days of great railroad expansions, when surveyors could either win people's favor or catch a rope around the neck, depending upon how close they laid their tracks to a civilized center. When the Central Pacific Railroad sends young Mr. Dalglish (Wes Bentley) and his crew into town, they are greeted with drinks and a furtive throw in the bordello, but an easiness drifts in beside them. Dalglish finds himself instantly enamored of saucy Lucia (Milla Jovovich), who works as a madam, cabaret singer, and Dillon's love-slave. As he observes, however, when one of his men is personally whipped by Dillon for petty robbery, this is not a system to be trifled with.

Complicating matters, a young lady named Hope (Sarah Polley) has floated into town and taken a shine to Dalglish. After some requisite explosions and avalanches, the plot thickens. Hope's mother, a strange, sickly woman named Elena (Nastassja Kinski), has attracted the undivided attention of Dillon, setting in motion a chain of events that will forever transform Kingdom Come.

The Claim is a tremendously ambitious project, what with the literary pedigree, the sheer enormity of the environment, and the crates of lip balm and long underwear the crew undoubtedly demanded. Unfortunately, the movie is a bit sluggish at times, and editing by Trevor Waite occasionally leans toward the vague, confusing side of artfulness, but it's impressive work nonetheless.