The Manhattan pre-school scene is so cutthroat, parents will do just about anything to get their kids into the best schools. That's the subject of the documentary Nursery University, which makes its local premiere tonight at 5:15 and 7:15 at the Cleveland Museum of Art's Recital Hall. Here's our review of the film. 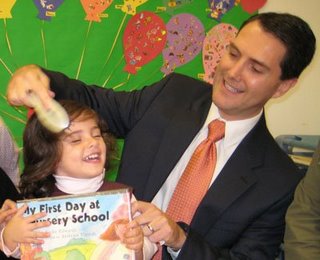 Nursery University (US, 2008) This documentary about competitive Manhattan preschools really sheds new light on the pomposity of upper-class New Yorkers who want to give their children every chance they can to ensure they’ll become successful. The affluent couples interviewed in the film truly believe that the best nursery school is the gateway to the best kindergarten, and ultimately the best grade and high school. Even if it costs as much as $20,000 a semester, and even if it requires hiring a consulting service to the tune of $4,000. One woman even starts to cry as she says, “You just want to give your kid the best chance. We’re not going to have him go to a public school in Harlem or something.” Directors Marc H. Simon and Matthew Makar follow several parents as they struggle to get their kids admitted into the best nursery schools. Simon and Makar provide a balanced look at the application process and even have the good sense to interview a number of detractors who call it a “blood sport.” *** (Jeff Niesel)

Editor's note: Can't make the screening? The film's just been put up on iTunes. Check it out here:
http://www.itunes.com/movies/nurseryuniversity