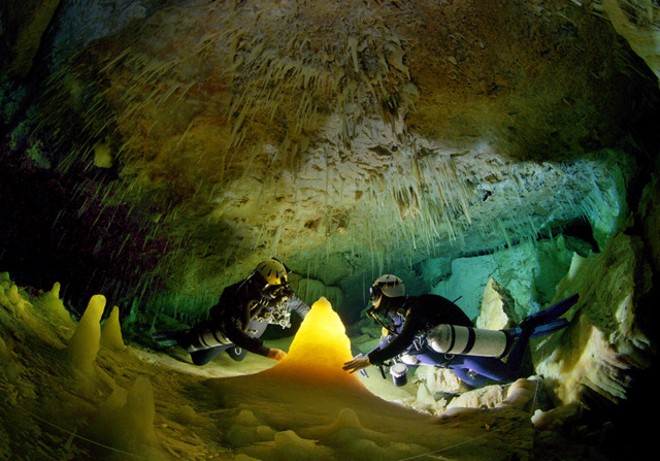 Journey to the center of the Earth without leaving your theater seat with the  film Ancient Caves.

On view at the Great Lakes Science Center's DOME theater, this film "takes you alongside scientists as they seek to better understand Earth’s climate history by studying some of the world’s most hidden realms."

Follow paleoclimatologist Dr. Gina Moseley and her team as they descend into remote caves across the globe, from France to Iceland and the Bahamas to Death Valley in California, to collect stalagmite samples to uncover clues about the planet's weather patterns.

“Ancient Caves takes audiences to some of the most extraordinary and beautiful places on the planet as it follows a team of researchers searching for clues hundreds of feet below the earth’s surface,” says director Jonathan Bird, who specializes in underwater cinematography, in the release. “These deep underwater caves are other-worldly, like something straight out of a sci-fi film, and audiences can expect to see things they’ve never seen before. The film has something for everyone, whether it’s adventure, science or just pure beauty.”

The family-friendly film is narrated by Emmy Award-winner Bryan Cranston (of Breaking Bad, Your Honor, Malcolm in the Middle), with an original score performed by the City of Prague Philharmonic Orchestra. And it's not only beautiful, the research conducted therein also won Moseley the Rolex Award for Enterprise for her exploration of Arctic caves.