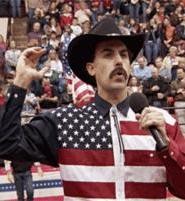 Sacha Baron Cohen has audiences laughing till it hurts.
Borat: Cultural Learnings of America for Make Benefit Glorious Nation of Kazakhstan is funnier than its twisted-English title -- the audience with which I saw the movie wasn't laughing so much as howling -- and even more difficult to parse.

Eyes wide, face fixed in an avid grin, Sacha Baron Cohen's ersatz Kazakh TV reporter, the ineffably oafish Borat Sagdiyev, goes looking for America. It's a documentary of sorts. The road trip -- he's afraid to fly "in case the Jews repeated their attack of 9-11" -- takes him from New York to Los Angeles (where he hopes to bag Pamela Anderson) by way of Mississippi and well beyond the boundaries of taste.

America, the "greatest country in the world," per Borat, first appears as a subway car in which the friendly Kazakh introduces himself to passengers and, as is his custom, attempts to double-kiss the men. Predictable agitation is trumped when Borat's cheap suitcase drops open to release a live chicken.

Not simply a jackass, Borat (like Baron Cohen's earlier creation, Ali G) specializes in one-on-ones with unwary professionals, snared by their willingness to humor a hapless foreigner and desire to appear on (even Kazakh) TV. Stooges range from a self-identified humor consultant ("Do you ever laugh on people with retardation?" Borat wonders) to a car salesman (asked if the automobile is outfitted with a "pussy magnet") to a pair of pols, former Georgia representative Bob Barr and perennial candidate Alan Keyes. What did they know -- and when did they know it? Keyes realizes something before our eyes when, after a long, faux-naive account of a Gay Pride rally, Borat says, "Are you telling me that the man who tried to put a rubber fist into my anus was a homosexual?"

How does Baron Cohen keep a straight face? If ever there was a movie that demanded a documentary devoted to its making, it's this one. (Press notes assert that the filmmakers were reported as terrorists and trailed by the FBI.) That both Barr and Keyes are right-wing moralizers suggests something about the Baron Cohen agenda. It's hardly coincidental that the antique store he trashes specializes in Confederate memorabilia. Interviewing "veteran feminists" or Atlanta homies, Borat baffles them with his chauvinist stupidity. But picked up by a vanload of South Carolina frat boys or chatting with the owner of the Imperial Rodeo, he has alarmingly little difficulty getting them to articulate the idea of reinstituting slavery or making homosexuality a capital offense.

Baron Cohen has gleefully involved the government of Kazakhstan in a campaign against Borat -- showing up at the White House on the day President Bush hosted Kazakh President Nursultan Nazarbayev. But his target isn't really an imaginary version of Nazerbayev's nation (or its enemies, the "evil nitwits" of Uzbekistan); it is rather the domain of the "great warlord Premier Bush" -- red states in particular. "I think the cultural differences are just vast," the Mississippi matron hosting Borat for dinner at her Magnolia Mansion (on Secession Drive) confides to the camera while her guest is away from the table. Those differences become unbridgeable, first when Borat returns with a stool sample, then with the arrival of his indescribably inappropriate date -- recruited from the back-page ads of the local alt-weekly.

The movie's set piece has Borat -- wearing an American-flag shirt and looking like Saddam Hussein plugged into the wall -- entertain a Virginia rodeo with his Kazakh version of "The Star-Spangled Banner." Borat's introductory declaration of support for America's "war of terror" gets an ovation, his fervent wish that George Bush "drink the blood of every man, woman, and child in Iraq" a slightly less enthusiastic one. The crowd starts booing, however, when they hear him sing, "Kazakhstan is the great country in the world -- all other countries are run by little girls." (Borat manages to complete this anthem; a report in The Roanoke Times suggests that Baron Cohen and his crew had to be hustled out of the place before they were lynched.)

It's almost anticlimactic when Borat wanders into a Pentecostal church and, in the presence of a Mississippi congressman and justice of the state supreme court, is baptized in the spirit. "Does Jesus like me?" he cries, his impassioned words lost in the mass babble and the strident "Kazakh" fiddle music arising on the soundtrack. To what faith does Borat subscribe? It's an interesting, never-answered question. At one point, he's told to shave off his mustache so that he doesn't look Muslim -- "just Eye-talian." But there's no suggestion that Borat is Muslim; his only religion seems to be anti-Semitism.

Borat is not just blatant but proselytizing; his statements precipitate the latent anti-Semitism around him. (The most outrageous example, not in the film, is the widely circulated TV bit in which Borat incites the patrons of an Arizona bar to join him in singing a Kazakh folksong, "Throw the Jew Down the Well.") Small wonder that the Anti-Defamation League has expressed concern. The organization deemed it unfortunate that Borat is identified with an actual nation -- as though the joke would work if Baron Cohen were passing himself off as a TV reporter from Upper Slobovia -- but that's a displacement. Its real anxiety is that by satirizing anti-Semitism, Borat will legitimize it.

It's a measure of Baron Cohen's dexterity that he plants his alter ego on both sides of the Jewish Question. "Kazakhstan" -- actually shot in Romania -- is a nightmare Eastern Europe where peasants bunk with livestock, torment Gypsies, and stage a traditional "Running of the Jew," chasing giant-fanged puppets through their muddy village. But as a native of this barbaric shtetl, Borat is also a non-Christian other, who -- by virtue of his primitive nature -- ridicules the hypocrisy of the dominant social order.

The ADL identifies Baron Cohen as an "observant" Jew. (I'm not sure what that means, but it seems less revealing than the subject of his Cambridge dissertation, namely the role of Jews in the American civil rights movement.) In any case, this comic has a distinctively Jewish sensibility. As sociologist John Murray Cuddihy notes in The Ordeal of Civility, his classic account of newly enlightened Jewish thinkers assimilated into the modern world, Marx, Freud, and Claude Lévi-Strauss were all similarly obsessed with "the raw, the coarse, the vulgar, the naked" and exposing the way in which these things were sublimated by the civil "niceness" of Western culture. So too, Borat (who might add the superstitious, the stupid, the sexist, and the xenophobic to that list).