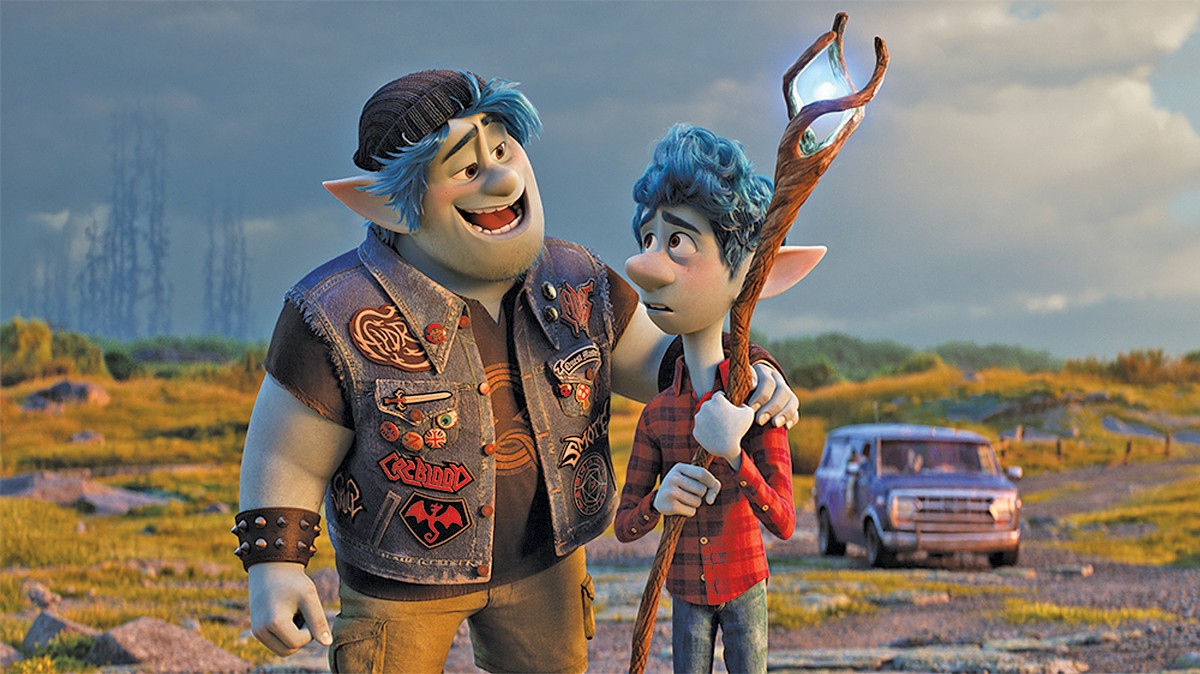 Like virtually all Pixar films, from 1995's Toy Story to 2017's Coco, the premise of Onward, which opens Friday in wide release, is built on solid imaginative foundations. Set in a fantasy land that resembles suburban U.S.A., the film is a standard teenage quest story in which the protagonists happen to be trolls (or elfs, or something).

On his 16th birthday, the socially awkward Ian (Tom Holland) is left a gift from his father, who died before he was born. It's a wizard's staff, complete with an incantation that will supposedly bring Ian's father back to life for 24 hours. Ian and his older brother Barley (Chris Pratt) attempt the spell, but only get it half right. Their father returns as a sentient, but unspeaking and unhearing, set of legs.

The film's central story, then, follows the brothers as they attempt to hunt for a magic stone that will allow them to cast the spell again, in time to see their full father in the flesh before he disappears forever. They are pursued, through the night, by their attentive mother (Julia Louis-Dreyfus) and a griffin-esque restaurant owner (Octavia Spencer) with a powerful, if dormant, magical heritage.

Like good PG fare, Onward is full of memorable visual gags. The silent, torso-less father accompanies the brothers on their quest and is the source of endless slapstick. So is Barley, who is reduced to Thumbelina size when another spell goes awry and then accidentally provokes a biker-gang of fairies. The condition of Barley's van, too, a junkyard salvage decked out in purple spray paint, provides recurring humor and even gets a soldier's send-off. It's not all physical humor, though. Complete with a climactic confrontation and a touching emotional resolution, Onward is high-grade family entertainment of the sort audiences expect from Pixar.

And yet, after the revelatory talking toys, fish and cars of previous Pixar worlds, to say nothing of the visual splendor of Coco or the bold visions of Wall-E and Inside Out, Onward seems destined to land in the middle of the pack within the Pixar canon. Though sweet, it's somewhat pedestrian in its ambitions, and looks to be capitalizing on Stranger Things fervor alongside the Ghostbusters reboot later this year. Beyond the magical history of the elves, the impulses and relationships — and even activities — of these characters are entirely human. They go out to dinner at kitschy chain restaurants. They play variations on Dungeons and Dragons. It's all extremely suburban.

For the record, this critique speaks more to Pixar's high bar than Onward's deficiencies, which are only evident by comparison. The director, Dan Scanlon, previously helmed Monsters University, another Pixar middle-of-the-packer.

The Pixar writers' room, it must be said, remains the best in the biz at nailing the beats of any family film. When the revelatory moral of the story hits, it does so with surprising emotional force and clarity.