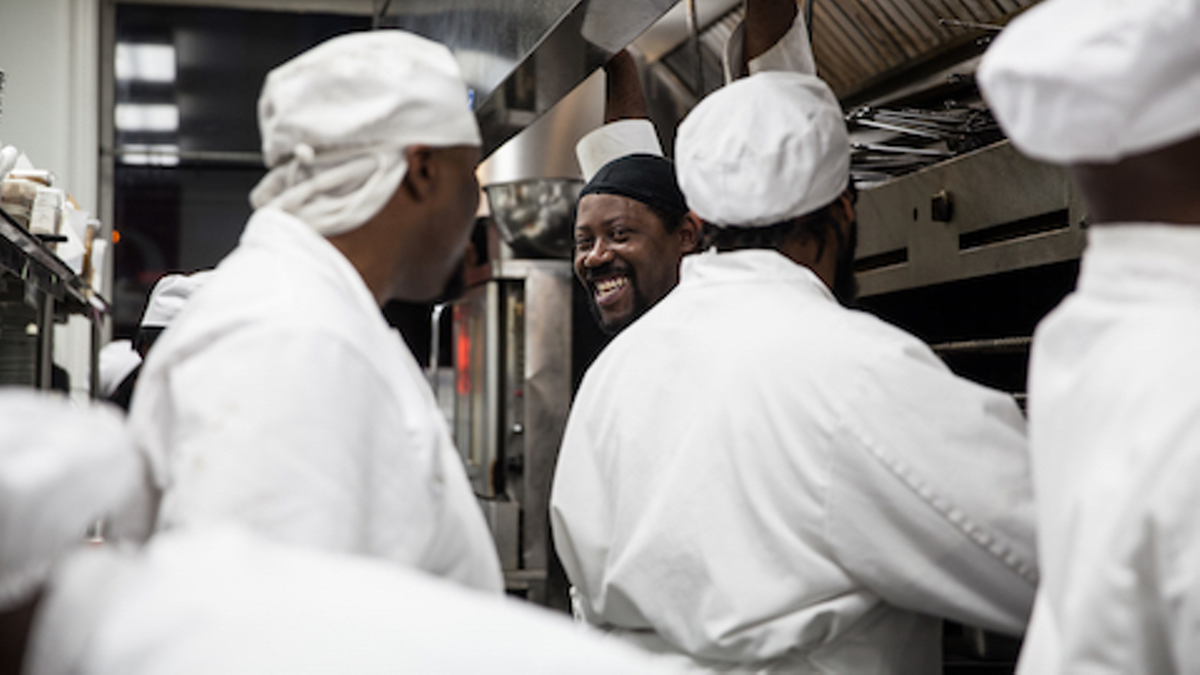 The animated, live-action and documentary short films nominated for Academy Awards will screen in three separate programs at Cleveland Cinemas' Capitol Theatre, Chagrin Cinema and the Apollo Theatre beginning Friday. They will run in staggered showings throughout the week. (See the full schedule, below.)

Most noteworthy for locals is the short film Knife Skills. Directed by Thomas Lennon, this 40-minute documentary recounts the harried six weeks before the grand opening of Edwin's Restaurant and Leadership Institute on Shaker Square. Featuring founder Brandon Chrostowski (who later ran for Cleveland mayor) and several of his inaugural cohort of former inmates, the film has the flavor of a culinary reality show: kitchen instructionals, lavish French ingredients, close-ups of cuttings boards, and more. Virtually none of the participants in the Edwin's program, which aims to curb recidivism by providing culinary work for ex-cons, had restaurant experience. The film is thus both redemptive and occasionally exhilarating. Will these folks who can't utter a single word of French become, in a mere six weeks, hosts and chefs at one of the region's fancier restaurants?

The animated shorts program is likely to draw crowds as well. Among other things, it features the short film Dear Basketball, conceived by Kobe Bryant and scored by John Williams. Portions of it have appeared in TV spots already. Pencil drawings by artist Glen Keane animate the NBA superstar's basketball origin story. While incredibly hokey — hasn't Kobe said farewell enough? — the Williams score may move you to tears.

Also included is the PIXAR short LOU, which envisions the assorted items in a playground lost and found box as a sentient, friendly being. Though each film is unique — distinguished by the style and medium of individual artists — my favorite is probably Garden Party, an impressive little French film that finds a number of exquisitely animated frogs hopping around the (presumably Floridian) mansion of a drug lord after a violent crime. The juxtaposition of the frogs themselves and the mansion's interiors make for wondrous viewing — and a killer finale, too.

The live-action program features a touching story about a deaf 4-year-old who learns sign language (The Silent Child); an Aussie head trip about a psychiatrist treating a patient who believes that he, too, is a psychiatrist (The Eleven O'Clock); a tense school-shooting drama (DeKalb Elementary); the story of Emmett Till's uncle, Mose Wright, as his home is invaded in 1955 Mississippi, (My Nephew Emmett); and the story of a Christian girl on a chartered Kenyan bus that is stopped by the terrorist group Al-Shebbab; its largely Muslim passengers are forced to identify the Christians (Watu Wote).

Seeing the Oscar shorts programs is a must for Academy Award completists, but recommended for everyone. These films are wonderful — they were nominated for a reason. Along with 12 Hours of Terror, it's one of the more appreciated annual traditions at the Capitol Theatre.