Paavo Turtiainen, Ingrid Bergman’s Personal Secretary and Archivist, to Speak at the Cinematheque on March 15 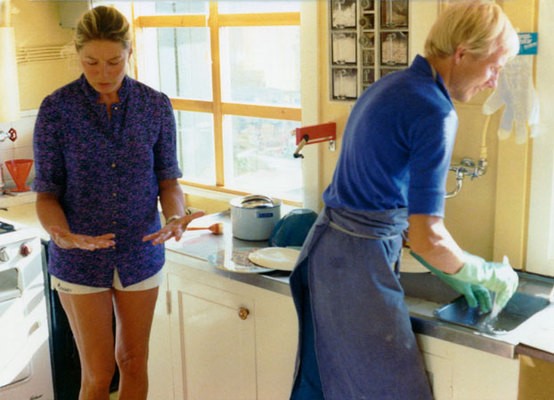 Courtesy of the Cleveland Institute of Art Cinematheque
Originally, Paavo, Life in Five Courses, a film about event planner and chef Paavo Turtiainen, was supposed to document how several Finns left their native country and became successful.

But when producer and director Hanna Hemilä began to interview and film Turtiainen, she realized she didn’t need the other subjects.

Turtiainen, who worked in Europe on and off for 12 years as personal secretary and archivist for movie star Ingrid Bergman, lived on a Finnish farm before moving to Paris and Sweden with Bergman and her third husband, Swedish producer Lars Schmidt.

Turtiainen would become Bergman’s trusted friend and confidante until her 1982 death. Turtiainen, who now lives in Cleveland but still commutes to New York on occasion for catering gigs, will answer audience questions after a screening of the film that takes place at 3 p.m. on Sunday, March 15, at the Cleveland Institute of Art Cinematheque. A dessert reception open to all ticket holders will follow the screening, the movie’s local theatrical premiere.

“The producer/director is a friend of a friend of mine from Finland, and so we met, and the producer asked if I would be part of this film that showed how Finns had moved out of Finland felt about their move and their original country,” says Turtiainen, who left the country when he was 19. “I said I would be a part of it, and then I never heard about the other people who were supposed to be in the film, and it became a film about me. It was an interesting project for me. There are things [in the movie] that hurt and things you laugh at.”

Turtiainen says that working with Bergman and with her husband Lars Schmidt, something that’s shown in the film, was a life-changing experience.

“She had always been this mother figure almost,” he says of Bergman. “She became my second mother, and she was very protective. I had never built an archive, so I had to built it from scratch. She kept everything, and there was a huge amount of articles. The thing I remember from that as well as from her husband’s archive was that I thought how small I was, and that I couldn’t do anything like what she had done. It was so massive, the amount of work she had done. It was the same with Lars.”

Because the movie is shown so infrequently in the United States, Turtiainen says he’s excited that the Cinematheque will screen it and give him the opportunity to take questions from audience members.

“The head of the the Scandinavian Film Festival in Los Angeles wrote a wonderful note that people came to see the movie to see Ingrid Bergman, but they left loving Paavo,” says Turtiainen, who comes off as a particularly kind and compassionate man in the movie. “In Oslo, where it was the opening feature at the European Documentary Film Festival, they called it the year’s feel-good movie. That’s a nice way of putting it. I just hope people like what they see and get some of the history of film. It’s a period which is gone, and it’s terrible that the era, which was so great, is forgotten.”