Brad and Angelina are out to kill each other. You may want a piece of them too. 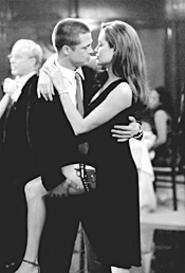 Brad and Angie shoot people and blow stuff up. Oh, yeah -- and one other thing.
The consequences of marital discord in Mr. & Mrs. Smith go way beyond sleeping on the couch or maintaining an icy silence at the breakfast table. Thanks to a cartoonish premise by British screenwriter Simon Kinberg -- and the dictates of the summer-movie marketplace -- the battling Smiths of the title go at each other with knives, fists, large-caliber automatic weapons, assorted high-tech computers, and enough explosives to level Baghdad -- or at least their own handsome white neo-colonial in the suburbs. Here is Who's Afraid of Virginia Woolf inflated to lethal proportion, or The War of the Roses reimagined as World War III.

Now, the prospect of two self-absorbed, gossip-column movie stars like Brad Pitt and Angelina Jolie exterminating each other -- if only onscreen, if only for make-believe -- has to be undeniably appealing to any clear-thinking person who laments the excesses and stupidities of celebrity culture. Were America's future to be both Pittless and Angelina-free, we might all be a lot better off -- at least until Ashton Kutcher and Paris Hilton style their way into the void.

Alas, in the end, the Smiths don't knock each other off at all. On the contrary, they eventually join forces and turn their considerable firepower on common enemies -- a development not exactly satisfying, but completely predictable. After all, how much wattage can a Pitt-Jolie matchup generate if they don't finally wind up in the sack, bullet-scarred but happy?

Suffice it to say that Brad and Angie like to shoot people and blow stuff up. To establish his credentials, Mr. Smith pretends to get drunk, crashes a back-room poker game in a New York Irish bar, and calmly kills everyone at the table. To show us how tough she is, Mrs. Smith seduces an arms dealer in a hotel suite (or is it a terrorist? Easy to forget these things, when the body count is so high) and snaps his neck with one deft twist. We're just getting started in the summary-execution department, of course. By the time hypercompetitive John and Jane wreck their SUVs and annihilate their tree-shaded manse -- he has about 200 guns in the basement; she keeps hers on cool secret trays behind the oven -- director Doug Liman (The Bourne Supremacy) has long since wearied us with his special-effects detonations and synthetic mass murder.

Meanwhile, writer Kinberg (XXX: State of the Union) means to amuse us with jokes based on the cynical fiction of the Smith union. Our couple may be hit people of great skill and international renown, but they go to a marriage counselor. Mr. Smith is not above complaining about the new curtains in the dining room. And the missus knows how to drop an inane compliment or two, when the neighbors invite them over for a deadly dull cocktail party. In fact, this is the most original and pleasing element of an otherwise ordinary, frequently dull summer action movie -- the way it savages middle-class sanctimony and white suburban contentment with the twin weapons of deadpan humor and ultraviolent farce. The family-values crowd is already up in arms about Hollywood decadence, of course: Liman and Kinberg and the movie's stars take great glee in shoving the right-wingers' self-righteous noses in it. Little matter that when the Smiths coalesce to kill a few hundred more people -- take note that one massacre plays out in a high-end home-furnishings store -- they actually start to tell the truth to each other and appear to fall in love for real. So what? They've already pissed off Focus on the Family and half of Congress, and that's not necessarily a bad thing.

It's hard to know how the late Alfred Hitchcock might react to the current Mr. & Mrs. Smith. In 1941, Hitchcock directed a highly uncharacteristic screwball comedy with the same title, in which the peerless comedienne Carole Lombard and leading man Robert Montgomery portrayed a quarrelsome New York couple who discover that their marriage isn't legal, decide to separate, and then discover that they can't live without each other. There were not 150 machine guns in the original, and stuntmen didn't wreck 750 vehicles. Lombard did not model a black vinyl mini-dress exposing a fair portion of her buttocks, as Jolie does here. And no one blew up three Manhattan skyscrapers. Otherwise, though, the 2005 version is pretty much the same as the Hitchcock. Copycats.