Paltrow anchors the screen version of a prize-winning play. 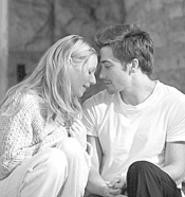 Catherine needs proof of her own sanity; Hal's after proof of her dad's genius.
In the tradition of A Beautiful Mind and Good Will Hunting comes Proof, a psychological drama about a math genius and the people who worship, care for, and endure him. Based on the Pulitzer Prize- and Tony Award-winning play by David Auburn, Proof is a strong film with intense focus. Its characters are complex and engaging, its central mystery pulls the action forward at a clip, and the performances by Gwyneth Paltrow, Hope Davis, and Anthony Hopkins are very good. At the same time, it has a gloss of aesthetic perfection that sends it slightly into the realm of the unreal. In other words, it's a little too slick.

We begin in a midnight downpour, peering through a window at Catherine (Paltrow), who has sunk into the couch in front of a flickering television. Alone at first, she is soon joined by her father, Robert, played by Anthony Hopkins. They discuss Catherine's birthday, which will pass uncelebrated, and then her father's death, which occurred a week before. That should be a surprise, but it isn't: One look at the collapsed lines on Catherine's face, and anyone can see that she has suffered a loss. Besides, in movies, dead people have a way of showing up.

Robert was a math genius, responsible for a vague-but-colossal accomplishment ("revolutionizing the field," or whatever) in his early 20s. Ever after, he attempted to match his early superstardom, but he was struck by mental illness and needed constant care for the final years of his life. Catherine provided that care, setting her own young life in abeyance, and she may be at least partly glad to be rid of him. Now, fragile and ablaze, she's terrified that she has her father's (unnamed) disease. Meanwhile, she must contend with Hal (Jake Gyllenhaal), an earnest graduate student, who wants to search Robert's prodigious scribbles for a publishable proof, and Claire (the gleamingly sharp Hope Davis), her sister.

Auburn has arranged a tight triangle of motivation: Catherine wants to be left alone in her grief; Hal wants to know her and her father's work; Claire, a corporate New Yorker intent on living a conventional life, wants to sweep in and clean up a mess that, for years and from afar, she enabled. Davis is an expert, and she does for Claire what the script can't, making a parodic character sympathetic and real. Claire is a list-maker with a Filofax, but in her wired ministrations and ceaseless jabbering questions is a concern for not just herself, but a sister she loves -- and fears, which is the problem. Claire is anxiously, distractingly convinced that Catherine is ill.

Proof would fail with anything less than a stellar performance from Paltrow, and indeed, she is excellent. She originated the role onstage in London and has claimed it for her own. Paltrow has always seemed intelligent but bland: Something important (power? ferocity?) has been missing from her performances. Here, she digs into her own center, where the vulnerable stuff is, and this lends the film its most fertile material. Proof wants to ask intellectual questions about truth and certainty; it wants to pit proof against trust. But what it's really about is people and relationships, and Catherine is the character we want to know. Her struggle keeps us tuned in.

Screenwriters Auburn and Rebecca Miller (writer-director of Personal Velocity) apparently remained fairly loyal to the script, but they did add several Big Moments, including Robert's funeral, at which Catherine seethes her way through a speech. The scene works, but it's the kind of thing that gives Proof its overproduced feel, since Catherine's vituperation is obviously contrived to showcase both her character (bitter, wild) and some critical exposition (Robert was difficult). According to the press notes, the screenwriters also added material to further explicate Proof's central mystery, and that's unfortunate. Those who've seen the play will have to judge, but the scenes in question seem to explain more than is necessary.

Still, the film survives this and other indiscretions. It's hard not to wish that the whole enterprise were less glossy, less shined to gleaming by its practiced art direction and ritzy production values. The family home is the picture of the crazy-genius archetype, with its requisite tsunami of papers and books, its piled dishes askew at elegant angles. Paltrow does her sulking in sexily low-slung pants, her abdomen making an unnecessary entrance in a wrenching scene. The math is kept far from us, where we can persist in finding its complexities benighted. And yet, Proof achieves its aim: We care about Catherine; we get behind her and want her to prevail.