Send a News Tip
The Punisher 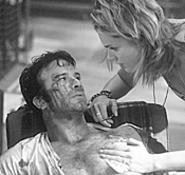 Keywords: Gruesome and mediocre.
Here's a subject with which no one should ever have to grapple: Is this new version of The Punisher, starring Thomas Jane as the comic-book assassin, better than the 1989 adaptation with Dolph Lundgren? They both offer slight variations on a tale first told in a 1974 Spider-Man comic, where the Punisher was introduced as a villain, and told again a year later, when Marvel Comics decided to give him a sympathetic back-story and make him a marketable, franchisable hero. Both films feature relative unknowns in the role of Frank Castle, a former crime fighter who witnesses the death of his family and transforms into a vigilante killer; Lundgren had appeared in only four films prior to suiting up as Castle, while Jane is best known, if at all, for playing Mickey Mantle in Billy Crystal's HBO movie 61*. Both versions feature actors once invited to the Oscars: Lou Gossett Jr. played Castle's partner in the 1989 film, while John Travolta is cast as crime lord Howard Saint in director Jonathan Hensleigh's redo. And both movies are equally awful.

It's time for even the most rabid fanboy to admit that the Marvel comic-book-to-feature-film craze has come full circle, from miserable adaptations (1991's Captain America, starring J.D. Salinger's son; The Punisher) to quality work (Blade; Spider-Man; the second X-Men) and back again (Daredevil; The Hulk; The Punisher). The movies saved Marvel, once on the brink of extinction after years of mismanagement; they gave the company Wall Street credibility and Hollywood currency, to the point where every single Marvel property is currently in development at some studio somewhere. (Next up: The Fantastic Four, Iron Man, Man-Thing, Namor, and myriad others with even more obscure heroes.) There is even a Punisher 2 in the works, though one is more than enough.

The Punisher would be almost offensive, were it not so inconsequential. There's just something terribly off-putting about a movie in which every gruesome death is a punch line, where a villain's homosexuality is used to lure him to his death and dozens of innocents are gunned down just to launch a film franchise. And while it may be obnoxious, messy fun in the name of cheap thrills -- the "shallow, primitive work" that gives the audience "a terrific kick," as Pauline Kael once wrote about the Charles Bronson revenge movie Death Wish -- it's also galling, considering that Marvel will also make extra coin off the movie's attendant merchandise-- especially the Punisher's skull T-shirt, which every kid will have to own. But the Punisher comics, of which there have been abundant variants over the years, aren't meant for kids, any more than this movie is fit for adults; so, hellooooo, comic-book readers.

The Punisher is less movie, anyway, than video game, with its puzzle-piece plot contrivances and third-person shoot-'em-ups; Thomas Jane, with hair dyed the color of Firestones, even possesses the limited expressions of an animated character going through the joystick's motions. After watching the slaughter of his entire family -- including father (played by Roy Scheider, who lost all that jazz), wife (Samantha Mathis), and son -- during a beachside family reunion, Jane looks more bored than distraught; the dead get more enraged. Even more confusing is Castle's disappearance after the massacre, during which he's severely wounded. He returns some months later, sporting a beard, but looking no less buff than before the shooting. Even on crutches, he's still doing stomach crunches.

Hensleigh, who co-wrote the movie with Hulk's Michael France (wuh-oh), has succeeded in making that shallow, primitive movie of which Kael wrote. It exists solely so that people can get shot, stabbed in the throat, pierced with arrows, and blown up; the filmmakers at least keep finding interesting ways for people to die. But as the bodies stack up, The Punisher drains of emotion; how are we supposed to feel anything, when all we're seeing is extras massacred on a movie set? Thomas Jane, as an actor, hasn't given us anything to feel: He's all facade, a blank stare on a handsome face perched beneath a bad dye job. So Frank Castle, the character, is nothing more than a weapon, a gun that keeps going off till its chamber is empty. When he's spent, so's the movie -- but not the audience, which couldn't care less about anyone on the screen.

Travolta is no better, playing yet another slimy caricature in yet another career move that erases the audience's goodwill; the role could have been played by anyone and often feels as if it's occupied by no one. Will Patton, bless him, is once more cast in the role of the gay villain who's forced to come out of the closet, just so someone can kill him; his Quentin Glass is a rehash of his role in No Way Out, which is how he must feel right about now. And poor Laura Harring is cast in the role of Travolta's conniving wife, the woman who orders the hit on Castle's family to begin with, after the death of her own son. Roles like this are why people keep referring to her as "the woman in Mulholland Drive who wasn't Naomi Watts." Docked extra points for its dreadful sludge-rock soundtrack, featuring Nickelback and Drowning Pool. They all oughta be punished.