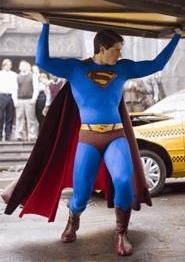 Brandon Routh looks the part, but he's no Christopher Reeve.
After all that, just . . . this? After all the anticipation, all the hype, all the product on toy-store shelves and in kiddie sections at bookstores; after all the promise that this would be the most super of Superman movies, all we get is just this . . . this . . . remake? Because let's first call Superman Returns what it is: clearly and merely the relaunching of a franchise that went the way of the planet Krypton 19 years ago. It doesn't even bother pretending to be something other than the same ol' thing; how could it, when the first words you hear are spoken by an actor who's been dead for two years? They could have just called this one Superman V: Archival Footage and at least been honest about it.

Which, really, is not to damn Bryan Singer's switch to DC Comics' toy box, after years of fussing about with Marvel's X-Men. It delivers what its title promises: the return of a hero humiliated into big-screen retirement. Superman Returns takes place some five years after the action of Superman II, with the Man of Steel returning to earth after he's wandered the universe, looking for a Krypton astronomers insisted hadn't blown up after all. But it's as though no time has passed: Superman's still trying to win Lois Lane's (now broken) heart when not saving the world, while Lex Luthor's still hatching nefarious real-estate transactions that would involve the deaths of innocent billions (the millions have been adjusted for inflation). And Marlon Brando's still speaking through crystal chandeliers hanging from the great bank vault in the sky.

This time around, Singer and his X2 cohorts, screenwriters Michael Dougherty and Dan Harris, have thrown in a few alterations: Lois (Kate Bosworth, enh) now has a five-year-old child (wait, how long has Superman been gone?), and she's engaged to Richard White (X-Man James Marsden), the nephew of a sleeker, tanner Perry White played by Frank Langella. And instead of having the pinup Miss Teschmacher and dumbed-down Otis by his side, Lex (Kevin Spacey) now hangs with the frizzier, feistier Kitty Kowalski (Parker Posey) and a band of brainiacs and bullies. Lex himself is a whole other brand of evil: Where Gene Hackman played the part as if he were spending six months at sleepover theater camp, Spacey is a nasty, mordant bit of work -- the only shadow in a movie all about the blindingly bright big blue Boy Scout.

But Superman is the same -- and the same as he's been since he softened during the post-World War II years: a drip in the middle of a soap opera, who takes a break from the love story every so often to put out a fire, rescue a kitty, save a plane, or, just maybe, keep an evil megalomaniac from destroying the planet. Brandon Routh is no Christopher Reeve, who was the same age Routh is now (26) when he first slipped on the spandex, but somehow possessed more warmth, humor, and substance all at once. They're playing the same character in essentially the same movie; Routh had no chance. Yet to deny the obvious would be to exclude one of the movie's central flaws: There's no man at the core of Superman. Clark is forgettable; Superman, memorable only because he has nearly 70 years of baggage to keep him on life support.

But here's the rub: The fanboy in me loves it, being wrapped in the warm projected glow of nostalgia for a movie I've memorized since age nine. And so the fanboy forgives the movie its clunky narrative and wholesale mimicking, because there's the note-by-note reconstruction of John Williams' score, with its theme that blares out "Sup-er-man" over the whoosh of the opening credits. The fanboy forgives Routh his cutout performance, because there are Noel Neill and Jack Larson, still onscreen some five decades after they first played Lois Lane and Jimmy Olsen opposite George Reeves' Man of Steel. But half an hour, an hour in, this feeling began to set in: I've seen this before. I expected a little more magic, not just a lot more computer-generated whiz-bang for the ever-diminishing buck.

Or perhaps, at this late date, it's impossible for a Superman movie to appease its two audiences: the moviegoer with scant knowledge of his weighty mythology and the comic-book reader for whom the movies are but a distraction from the more knotty plotlines unfolding out of the view of casual ticket-buyers. At this very moment in the comics, Superman's been without his powers for a year and learned to adjust to the realization that Clark Kent is who he is, while Superman is what he does. He and Lois are long past the will-they-won't-they tease that still drives the movies; they're a married couple now, struggling as much with the mundane for-better-or-worse part as with the nonsense that comes with heat vision and Kryptonite allergies. At long last, the comics have made him as captivating as the costume he wears; the movies, not so much.