Requiem for a Dreamer

This horse movie needs to be put down as soon as possible.

Send a News Tip
Dreamer: Inspired by a True Story 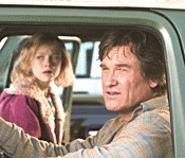 A close look at the end credits, however, reveals the following disclaimer: "All of the characters have been invented and the specific events are entirely fictitious." Whuh? By that standard, couldn't one make the case that every screenplay is inspired by a true story?

The only thing that really matters is whether the movie's any good, and the answer here is a qualified "no." Qualified in the sense that if you're a little girl in the Lisa Simpson mold, for whom the greatest wish-fulfillment in the world would be to have your own pony, Dreamer just might be for you. Dakota Fanning is actually starting to bear an uncanny resemblance to Homer's daughter, come to think of it.

Dreamer is the story of a horse named . . . Soñador. That's Spanish for "Dreamer," and also a less marketable title. Soñador, nicknamed "Sonya," is but one of many horses in the stable of rich, racist Mr. Palmer (David Morse), who insists on running her even when trainer Ben Crane (Kurt Russell), who apparently speaks Equestrian, knows for sure that Sonya just told him she doesn't want to race. Sonya proceeds to break a leg, but Ben won't kill her, as Palmer insists he should. Instead, he quits his job and takes the horse as his own, much to the delight of daughter Cale (Fanning) and the disgust of Ben's crusty old Pop (Kris Kristofferson).

A bunch of stuff happens that's too annoying and too obvious to bother mentioning . . . the short version is that eventually, Cale ends up being Sonya's owner, and Sonya gets to race again. Not exactly the deepest of tales, yet first-time director John Gatins feels compelled to mention 9-11 as the reason he made this movie, because, being the son of a police officer, he got very emotional and patriotic, and decided "to explore a world steeped in Americana, which I think horse racing really is." It's tempting to suggest that the "true story" that inspired Gatins is the story of a summer day when he entered a darkened movie theater and watched Seabiscuit. On offer here are the same platitudes about how healing an injured horse ultimately heals an entire family. Choice lines of dialogue include "You saved her life -- she's just returning the favor"; "Since she's been in that barn, we have a family for the first time in years"; "She wasn't just some horse, she was our horse!"; and this gem, delivered by Fanning: "Please don't treat me like a little kid." (Honey, look in the mirror.)

There's nothing in Dreamer: Inspired by a True Story that's surprising in the least. If you have a little daughter, and she insists that you take her, try to fall asleep quickly -- the true story of your very own dreaming is bound to be an improvement over what's on the screen.